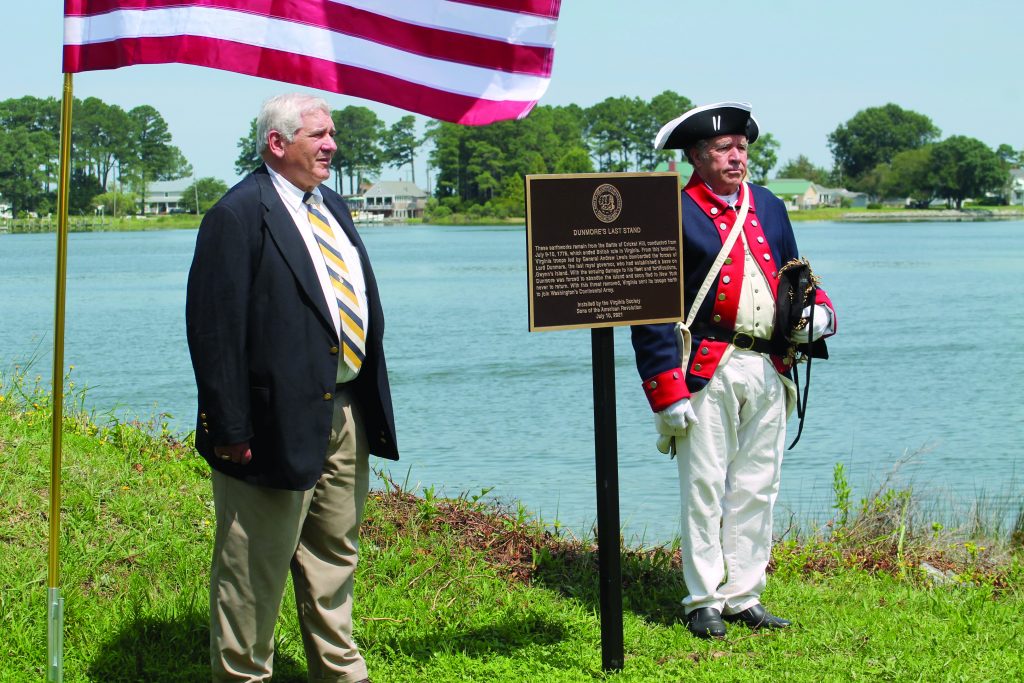 SHERRY HAMILTON / GAZETTE-JOURNAL Above, left, Mathews resident John Priest, vice president of Thomas Nelson Jr. SAR, and Dale Corey, past president of the Col. James Wood II SAR, unveiled the plaque (at right) that was placed at the site of the Battle of Cricket Hill. Below, the 7th Virginia Regiment reenacted the Battle of Cricket Hill during Saturday’s ceremonies. Here, they fire a 3-pounder over Milford Haven, rather than the 9- and 18-pounders that were actually used in the battle.

Sons and Daughters of the American Revolution from all across Virginia were in Mathews on Saturday to commemorate the 245th Anniversary of the Battle of Cricket Hill and to unveil a plaque identifying the site.

The ceremonies, which included a reenactment of the 1776 battle, were held at Morningstar Marinas, where some of the earthworks that were built for the battle still remain.

Virginia SAR President Jeff Thomas served as master of ceremonies for the day’s activities, with welcome and greetings also given by Mathews resident Colanne Bunting, regent of the Cricket Hill Chapter of the National Society of Daughters of the American Revolution; Justin Thomas, second vice president of the Virginia Children of the American Revolution; and Dr. Ken Hawkins, councilor for the Virginia Society of the Order of Founders and Patriots of America. John Priest, vice president of the Thomas Nelson Jr. SAR, led the Pledge of Allegiance and assisted with the unveiling of the plaque. Several ...