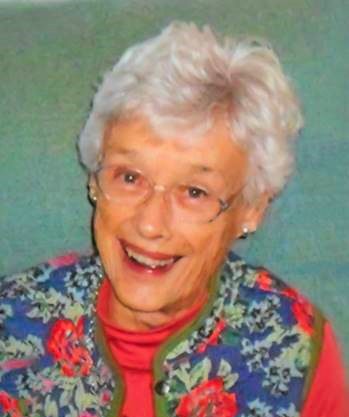 Patricia Malmar Almond, 95, of Cobbs Creek, Virginia, passed away on Sunday, June 5, 2022, in Riverside Walter Reed Hospital after a brief illness. She was born on April 30, 1927, in New York, N.Y., to Howard Burgess Malmar and Mary McKnight Malmar. She attended Skidmore College (Saratoga Springs, N.Y.) but interrupted her education to marry returning WWII veteran D. Henry Almond of Appomattox, Va., in 1947. She later finished her formal education at Virginia Commonwealth University in 1980, graduating with a B.S. in Mass Communications. She and Henry lived in several places in Virginia before settling into a home she designed in Cobbs Creek. She was preceded in death by her parents, husband Henry, and her eldest son, Howard Malmar Almond (Mary Beth). She is survived by two children, Tacey Almond Dale (Bill) and William Kenneth Almond (Nancy); four grandchildren, Emily Hudson (Drew), Page Kelsey (Nathaniel), Sarah Ramirez (Alex), and Benjamin Almond; four great-grandchildren, Madison, Wesley, William, and Cooper. She is also survived by a sister, Constance Harris (Thomas) of Hartfield, Va.; two nieces, and her dear friend, Tom Bartron.

Pat was a freelance writer who wrote articles on a wide variety of subjects including business, boating, food, and travel. She also did the illustrations for a syndicated column on flower arranging. Before her death, she was finalizing a non-fiction book based on her grandfather’s journal about his voyage to the Far East in 1905. She was active and adventurous. While living in Richmond she and Henry spent many a happy weekend on their cruisers berthed in a Deltaville marina. She loved sailing and owned a 17’ daysailer until age 75. She and Henry traveled widely abroad after his retirement. At 81, she had her first whitewater rafting and camping experience; she was pitching her tent and packing it up in no time. For her 90th birthday Pat, accompanied by family, fulfilled a long-held desire for a hot-air balloon ride. She took great pride in caring for her flowers and lawn. She also enjoyed bridge, Scrabble, lively games of Mexican Dominoes, and learning to play chess in her 90s. Her involvement in community affairs included successful advocacy for hospice care in the Middle Peninsula area. She was a volunteer with hospice patients for many years and did pro bono public relations for Riverside Walter Reed Hospice. She was active in the Great Decisions foreign policy discussion group in Middlesex and was still delivering Meals on Wheels. A very informed voter she almost never missed an election; she contributed to many charities. Pat was a person who had made peace with the world after a life-threatening bout with cancer in her early 50s. She decided to live the rest of her life in gratitude and positivity, with passion and without complaint. In this, she was buoyed by the deep love she had for family and friends and that she received from them. Pat leaves not only the example of her own life but also many, many wonderful memories to comfort her family and friends. In Patricia’s memory, contributions may be made to Habitat for Humanity (habitat.org/support), UNHCR (UNrefugees.org/support), or a charity of their choice. A memorial service will be held at Westville Christian Church, 261 Main Street, Mathews, Va. 23109 at 2 p.m. Saturday, July 30, 2022. Inurnment will be private.