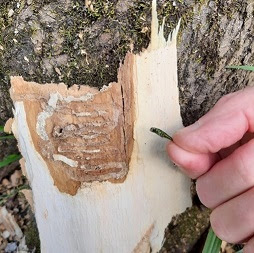 VDOF PHOTO The Virginia Department of Forestry confirmed the presence of the emerald ash borer, an invasive tree-killing insect, in Gloucester County.

The Virginia Department of Forestry has confirmed the presence of the emerald ash borer (also known as EAB), an invasive tree-killing insect, in Gloucester County.

Since it was first identified in Virginia in 2008, this destructive forest pest—one of the worst to ever invade the U.S.—has destroyed millions of ash trees. The EAB has now been documented in nearly every county across the commonwealth, the VDOF stated.

This small, metallic-green beetle specifically targets ash trees. However, some other tree species are also susceptible to EAB damage. Just one insect can lay 40-70 eggs, resulting in larvae that bore into the tree and feed on the inner bark and water system. This activity robs the tree of vital nutrients and eventually kills it. Signs of an EAB infestation include thinning tree canopy, small holes on the bark shaped like the letter “D,” epicormic branching (sprouts from the trunk or limbs), and serpentine markings under the tree bark.

“It is most critical to consi...