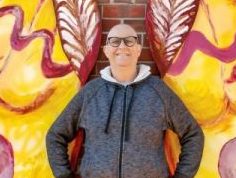 Dawn Leander, 57, took flight to her final destination on Tuesday, July 5, 2022. Dawn made her dramatic entrance into the world on Aug. 27, 1965, in Orange County, California. It was here that she married a Navy man, moved across the country with him, and birthed two of the greatest legends the world will ever see. Dawn worked as a municipal clerk for the state of Virginia and spent her spare time volunteering and exploring the outdoors while raising her two children. She made it to every sports game, hosted every slumber party, and cooked delicious meals for her family all while she touched the hearts of many. Her smile and laugh were infectious, and her compassion was endless. Many people called her a trip, but she always referred to herself as a vacation. She was preceded in death by her father, Michael Leander, and her beloved cat, “Groucho.” She leaves behind her children, James (Allie) and Elizabeth Hobgood (Chris Shupp), as well as her mother, Carla Schwietz, and three brothers, Michael, Anthony, and Brent. A private service will be held for the family. In lieu of flowers, we ask that everyone share a smile with a stranger in Dawn’s memory. In the words of a wonderful mother, and beautiful human, “tata for now.”