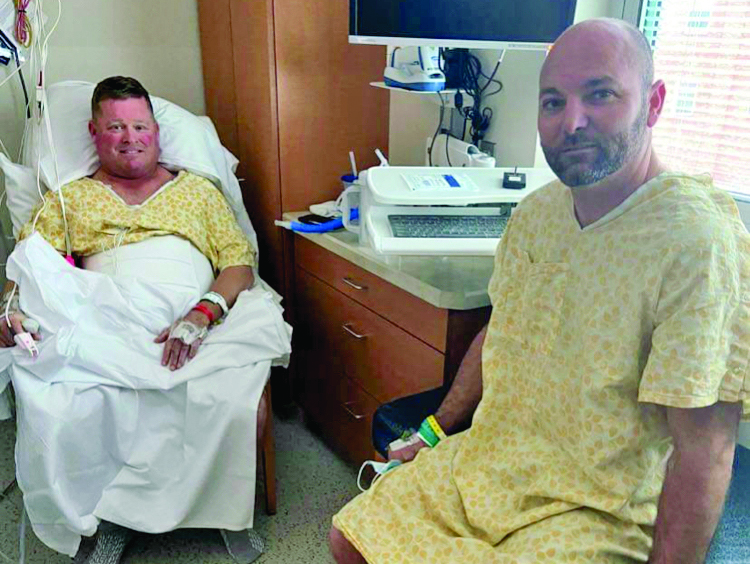 Curt Faulkner, at right, became Chris Leigh’s living kidney donor on March 11. The two Mathews friends are pictured here after surgery at the University of Virginia in Charlottesville.

Mathews residents Curt Faulkner and Chris Leigh have known each other for 20 years and recently underwent a medical procedure that made the bond between these two friends even stronger.

When Leigh was 20 years old he was diagnosed with Crohn’s disease, a rare type of inflammatory bowel disease. Blood work also revealed that his creatinine levels were slightly elevated, which signaled a possible problem with his kidneys. He was referred to a specialist who monitored his levels every year.

Over the years, his creatinine levels went almost back to normal and Leigh started his boat business at Oyster Cove. In 2016, his creatinine levels started elevating again and he had to undergo a biopsy in 2017. After his biopsy, Leigh was diagnosed with IgA nephropathy, a kidney disease, also known as Buerger’s disease. He was told that he would need a kidney transplant in the next three to five years.

In 2020, Leigh’s creatinine levels increased more and his kidney function was only at 45 percent. By last September, his kidney function had dropped to 25 percent. Leigh’s wait to obtain a kidney through a deceased donor was estimated to be five to six years; unfortunately, he did not have that long.

In September, Leigh hired Consociate Media to post on Facebook about his need for a living kidney donor. The video got 54,000 views and Leigh was inundated with people wanting to donate.

Among those willing to donate was Faulkner, who began the lengthy process of becoming a living kidney donor right away after talking to his wife.

“I knew he was sick, but didn’t know it was that bad,” said Faulkner.

In the meantime, a retired Newport News police officer who had been honorably discharged after breaking his back in the line of duty approached Leigh and told him that he wanted to donate his kidney. Since he could not save lives anymore by being a police officer, he wanted to save Leigh’s through kidney donation.

The retired police officer kept Leigh updated throughout his process of becoming a living donor. On Dec. 7, he notified Leigh that there was one person who was a better match for Leigh than he was and Leigh had no idea that person was Faulkner.

In December, Leigh’s health began declining and he was retaining too much fluid.

“It was a really tough time,” said Leigh.

Leigh had to start dialysis, even though his doctor had hoped that he would get his new kidney before that became necessary.

On Dec. 28, Leigh had been having a really bad day when a mutual friend said that he had a Christmas present for Leigh. That night, Faulkner and his whole family arrived at Leigh’s home and Faulkner told him that he was his match.

Faulkner and Leigh underwent the transplant surgery on March 11 at the University of Virginia in Charlottesville. The surgery was delayed because Leigh had to get a COVID-19 vaccine since he was so immunocompromised. Faulkner could not get his vaccination in case it negatively affected his chances of donating his kidney to Leigh.

Faulkner walked down to Leigh’s hospital room the morning after their surgery at 4:30 to check on his friend. They were both able to leave the hospital that weekend.

The next Friday, Faulkner began feeling bad and experienced a fever. He then spent the next 14 hours in the emergency room and was admitted Saturday morning. After CT scans and blood work, the doctors discovered that Faulkner had an infection from surgery. He was given antibiotics and was sent home the following Tuesday.

Faulkner was feeling better each day until the following week when he started feeling bad again. That week he experienced another fever and no appetite so he got a COVID-19 test. On April 2, he received a call from the Virginia Department of Health telling him that he was positive for the disease and to quarantine for 10 days at home. Faulkner now has to wait 90 days to get his COVID-19 vaccine since recovering from the disease.

“Now we’re out and about and life is good,” said Faulkner.

“You don’t know how much a kidney does for you until you lose it,” said Leigh.

He will be on anti-rejection medication for the rest of his life. For now, he goes to Riverside Walter Reed Hospital on Gloucester Main Street for blood work every Monday and Thursday. He also travels to UVA every week so the doctors can complete a blood work panel, monitor his creatinine levels, and check how he is feeling.

Faulkner was glad that he was able to give Leigh his kidney and another chance at life.

“I’d do it again in a heartbeat,” said Faulkner.