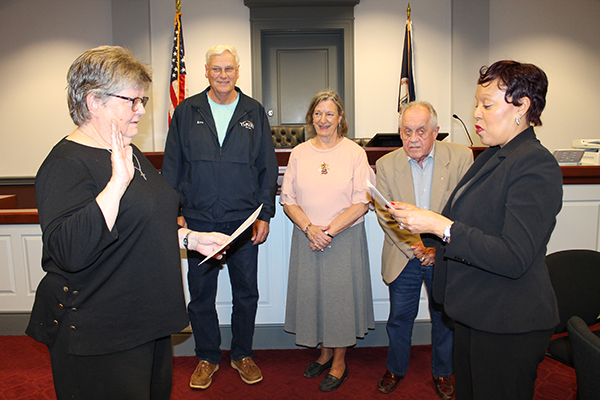 After having been declared the winner by four votes in Friday’s recount of the Mathews County Board of Supervisors Nov. 5 election, Jackie Ingram, front left, was sworn in by Mathews County Clerk of Circuit Court Angela Ingram during a brief ceremony on Monday in the courtroom. At the ceremony, back from left, were friend and neighbor Ron Lambert, Mathews Electoral Board Chair Josie Thorpe, and husband Tom Ingram. Photo by Sherry Hamilton

A three-judge panel declared Jackie Ingram the winner in the Nov. 5 Mathews County Board of Supervisors election after a recount on Friday that lasted all day. She was sworn in on Monday during a brief ceremony in Mathews County Circuit Court.

Votes for Ingram and incumbent supervisor G.C. Morrow were tallied by hand during the recount, with Ingram gaining three votes and Morrow one vote in the Westville District, while Ingram lost one vote and Morrow gained two in the Piankatank District. Morrow also gained a vote in the Chesapeake District. In the end, Ingram still led by four votes, with 1,465 votes to Morrow’s 1,461.

Problems with one of the voting machines led to officials being unable to determine whether two ballots had been counted. The ballots got stuck in the machine and were torn, said Mathews County Registrar Carla Faulkner, but when officials opened the machine with the judges’ consent to try to determine which ballots had caused the jam, they couldn’t.