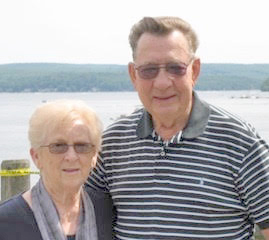 Bill was born in Salem, Illinois, the third son of John A. and Maggie (Phillips) Sutherland, both who preceded him in death. In addition, he was preceded in death by his four brothers, Dale (wife Pat), Armond (wife Anita), Otis (wife Dorothy) and David (wife Ruth).

Both Rose and Bill were also preceded in death by their daughter, Lisa Lynn Sutherland who was stillborn on Feb. 26, 1958.

Bill was a Korean War veteran and worked in the Energy Sector for over 37 years, retiring from Koch Industries in 1995. His career took him to various locations around the United States and international locations.

Rose was a stay-at-home mom until she became an elementary school secretary with the El Dorado, Kansas, school district in 1979. She retired in 1995. After retirement they both followed their love of travel and made many trips inside and outside the United States, many on mission trips to help other Christians around the world. Rose and Bill retired to Lakeland, Florida, where they enjoyed travels, sunshine, and friends. In 2012 they moved to Guymon, Oklahoma, to be closer to their children and grandchildren.

A Celebration of Life for Rose and Bill will be held on Saturday, Jan. 29, 2022, at 12 p.m. at the Sutherland Funeral Home located at 235 N. Sycamore Street, Centralia, Illinois, with Pastor Steve Upchurch officiating. A private family burial will be held at a later date at Hillcrest Memorial Park in Centralia. Masonic Rites will be accorded Saturday morning at 10:45 at the funeral home. Visitation will be held Saturday from 11 a.m. until the time of service at the funeral home. In lieu of flowers, Rose and Bill have requested that memorials to be made to Gwynn’s Island Baptist Church or the Oklahoma Baptist Home for Children and will be accepted at the Sutherland Funeral Home at 235 N. Sycamore Street, Centralia, Illinois 62801, 618-532-3523, who is honored to be of service to the Sutherland Family.

Online condolences may be made to the family by visiting https://www.sutherlandfuneralhome.com and the Sutherland Funeral Home Facebook page.