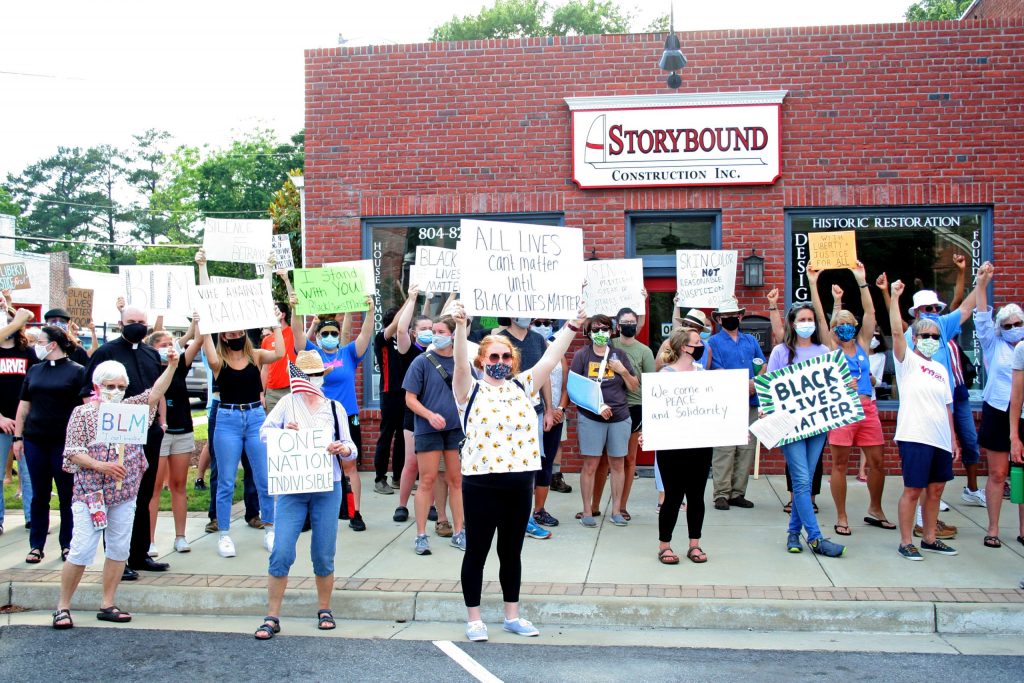 Protesters hold up signs at the start of Wednesday's march against racism in Mathews. Additional protests are planned for Friday and Sunday in Gloucester. Photo by Tyler Bass.

Approximately 175 protesters came out on Wednesday afternoon in a walk held to raise awareness of racism in response to a number of recent events, most recently the killing of George Floyd, an African American man, at the hands of Minneapolis police. The marchers walked from the area of Brickbat Road to the Liberty Square courts complex.

Many marchers held up signs denouncing racism and inequality in the county. Some of the slogans included, “Racism is Our Longest-Standing Pandemic,” “We Need Change Everywhere,” “Blessed are the Peacemakers,” and “Black Lives Matter! Equal Justice for All.” The signs reflected the chants of “No Justice, No Peace” that could be heard throughout the line that stretched down the sidewalk.

Despite concerns shared on social media about outside agitators coming to disrupt the event, the walk and protest was a peaceful one. The event concluded with those in attendance kneeling in silence for eight minutes, 46 seconds, the amount of time that the Minneapolis officer had restrained Floyd by placing his knee on Floyd’s neck.

The march was one of several planned for the area in the coming days. Additional protests will be held at 4 p.m. Friday at Grace Covenant Presbyterian Church in Gloucester and two on Sunday (9 a.m. and 5:30 p.m.), also in Gloucester Court House. Be sure to read next week’s Gazette-Journal for more information.