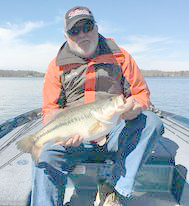 He was preceded in death by his parents, Leidy B. Peters Jr., Mildred R. (Elliott) Clark and stepfather, George R. Clark Sr.
A Celebration of Life service will be held at 1 p.m. Tuesday, June 22 at White Stone Church of the Nazarene, White Stone. A reception will follow the service.

In lieu of flowers, the family requests memorial contributions be made to the White Stone Church of the Nazarene, P.O. Box 1270, White Stone, Va. 22578.