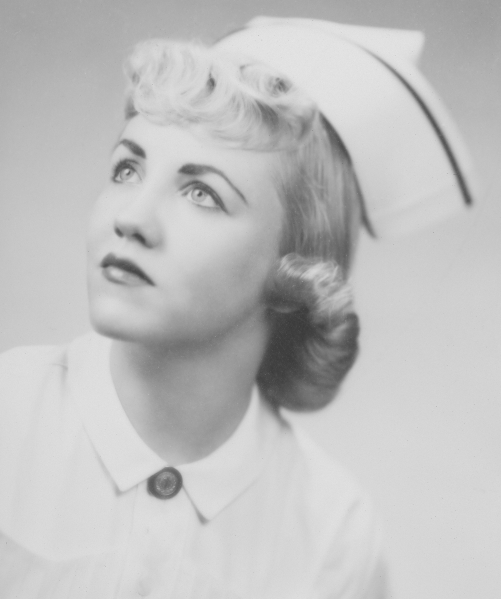 Judith Ann Harder (née McCarvel) passed away on Jan. 7, 2021 after a brief illness. She was surrounded by family.
Judith was born to the late Joseph and Ruth McCarvel in Anaconda, Montana, on Nov. 10, 1935. She was the oldest of eight children in the household. She graduated from Anaconda Central High in 1953, then proceeded to earn a degree from Carroll College School of Nursing in 1956.

While in college, she met Robert Harder and later married in 1957. After marriage, the couple moved to Chicago, then to Alexandria, Virginia. Judith worked as a geriatric nurse for several years until she left to raise her four children: Eric, Theodore, Paul, and Robert. The couple later divorced after more than 25 years of marriage but remained good friends.
Judith traveled a great deal in her life, living in places such as Kill Devil Hills, N.C., Scottsdale, Ariz., and Arlington, Va. Her travels led to different career choices including bookseller, real estate agent, correctional facility nurse, and insurance claims reviewer. She eventually retired in Gloucester to be closer to her family.

Judith enjoyed spending time with her family. She loved traveling to visit her siblings for reunions. She loved the times she spent with her sons, daughters-in-law, and grandchildren. She loved to cook but enjoyed going out more. And, if encouraged, she would play “Lady of Spain” on her concertina. And she was always ready with a warm hug and a bright smile to all who visited.

Judith was preceded in passing by her ex-husband Robert Harder; her son, Eric Harder; her grandson, Steven Harder, and her siblings, Francis McCarvel, Linda Walters, Mark McCarvel, and William McCarvel. She is survived by her sons, Theodore Harder of Gloucester, Paul Harder of Williamsburg, Va., and Robert H.B. Harder of Danville, Va. She is also survived by three sisters, Susan Sherman of Gig Harbor, Wash., Kathleen Nims of Portland, Ore., and Ruth Quigley of Las Vegas, Nev. Judith is also survived by nine grandchildren and one great-grandchild.

Due to COVID-19 restrictions, the family will be holding private ceremonies to remember our Judith. In lieu of flowers, the family asks that donations be made to the Benedictine Sisters of Virginia (https: //osbva.org/).