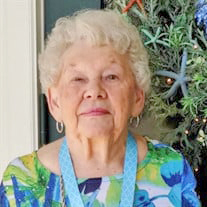 Joanne Phillips Shackelford of Gloucester Point, Va., peacefully left this earth on Tuesday, June 21, 2022, and finally reunited in her heavenly home with her husband, Herbert, mother Lena, brothers, sister, and friends she had been missing for years. Joanne was a wonderful wife to Herbert, who preceded her in death in 2017, for almost 60 years. She was a loving mother to her daughters, Connie and Pam, and a proud Nannie to her grandson Hagan. Joanne grew up in Seaford, Va., where she lived until marrying Herbert in 1958 and moving to Gloucester Point, where they made their home. She was a caring, loving, and generous homemaker for her family and many neighbors and neighborhood children. She held many different positions throughout her lifetime. She began as a secretary at Fort Eustis, Va. She cared for children in her home for several years, was a caregiver at Sanders Nursing Home, and spent many years at H.C. Shackelford Oil Company until retiring in 1985. She and Herbert enjoyed retirement together until their grandson Hagan was born in 1993. One of the greatest joys of their life was keeping him while his parents worked. She was an active member of Gloucester Point Baptist Church, volunteering in the preschool classroom and with Vacation Bible School. She leaves behind to cherish her memory, her devoted daughters, Connie S. Licone, Pam S. Strickland and her husband Lincoln; grandson, Hagan Witt and wife Taylor and great-granddaughter, Rilynn Witt; Hagan’s father, Tucker Witt and wife Amanda; sister, India Wood; nieces, Robin Sleigher, Bonnie Vaughn, Rhonda Byrd, and their families. The family would like to thank the wonderful staff at Harmony on the Peninsula for taking such good care of her for the past five years, especially at the end of her life. A graveside service was held on Saturday, June 25, 2022, at 11 a.m. at Rosewell Memorial Gardens Cemetery, on Providence Road in Hayes. In memory of Joanne, contributions may be made to the Alzheimer’s Association, 4600 Cox Road, Suite 130, Glen Allen, Va. 23060.