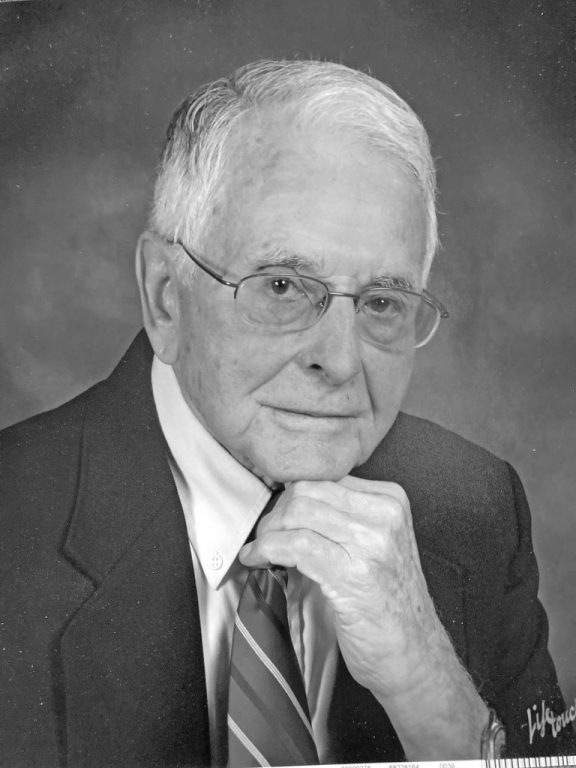 Hugh Charles Dischinger Sr. of Gloucester Court House, died unexpectedly July 11, 2020, at the age of 96. He was born March 4, 1924 in Chicago, Illinois, to Irvin E. and Evelyn Bender Dischinger. His family moved to Gloucester Court House in 1928. His parents and three brothers lived in the Botetourt Hotel and the Southside Building, before buying the family home on Lewis Avenue in 1934. He attended Christchurch School and Virginia Military Institute. He was a Fighter Pilot in the U.S. Army Air Corps in WWII, with overseas duty in the Pacific Theater. He observed the bomber headed for the destruction of Nagasaki, as it refueled and took off from the airfield on Iwo Jima.  His was the first Army Air Corps unit in the Pacific to fly jets, the P-80, and he was the third in the unit to be checked out. After the war, he returned to VMI to complete his education in Civil Engineering and was elected valedictorian of his graduating class.

While visiting home in Gloucester, he met the only woman for him, Thelma Ann Brown of Ware Neck. They were married in 1950 and were devoted to each other until her death in 2004. Hugh continued to live in the Lewis Avenue home until he moved into Commonwealth Senior Living in Gloucester in 2018.

Hugh was a lifetime member of Ware Episcopal Church, and he served as Sunday School Superintendent, Vestryman, Senior Warden, and Honorary Vestryman. He also was active in the Boy Scouts of America and was winner of the Silver Beaver Award from the Middle Peninsula Council. Professionally, he was a practicing Civil Engineer and Surveyor, owning a consulting engineering firm in Hampton and later in Yorktown. He served as president of the local chapters of the American Society of Civil Engineers and the Virginia Society of Professional Engineers. He was appointed by the Governor of Virginia in 1966 to the Virginia Marine Resources Study Commission. He was a docent for the Rosewell Foundation in Gloucester.

The family would like to thank the entire staff at Commonwealth Senior Living in Gloucester for their loving and welcoming care.

In lieu of flowers, the family wishes to honor Hugh’s memory with gifts to Ware Episcopal Church, P.O. Box 616, Gloucester, Va. 23061 or the Rosewell Foundation at foundation@rosewell.org.