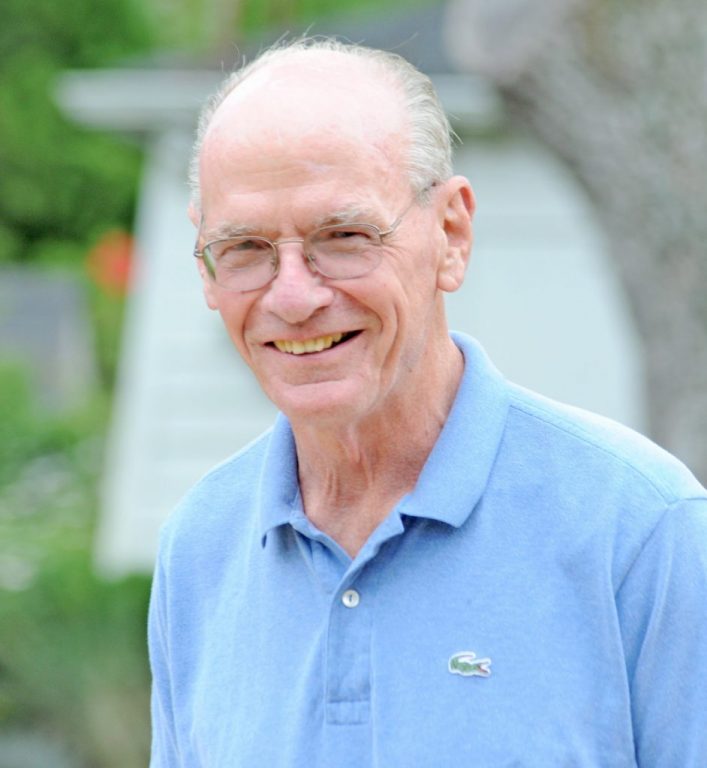 Henry Hanna McVey III died peacefully in his sleep at Williamsburg Landing on July 28, 2021, after a long illness. He was 85.

Hal McVey was born in Richmond, raised in the Fan District, and never lived west of the Boulevard. He rode a streetcar out Broad Street to St. Christopher’s School where he excelled academically, was Chairman of the Honor Council, sang in the Glee Club, and captained the Saints in a leather helmet with no face mask. He spent his boyhood summers at Gloucester Banks and Camp Maxwelton, and both helped shape the man he would become.

Hal attended Hampden-Sydney College, where he was a member of the Chi Psi fraternity, and the honor societies, Omicron Delta Kappa and Phi Delta Kappa. He graduated in 1957 with honors and bachelor’s degrees in both Arts and Science. He fiercely loved the college and everything it stood for and remained deeply devoted to the school, its music program and the Tigers down through the years. He counted his appointment to the Hampden-Sydney College Board of Trustees, and the opportunity to serve as Chairman of that body, as one of the greatest honors of his life.

In 1964, Hal was introduced to a young singer from Baltimore named Reba Robinson, sparking a love and partnership that would endure for over 50 years. Together Hal and Reba raised three children, restored three homes in the Fan, sang in the choir at Second Presbyterian, attended concerts, and traveled the world, making friends along the way that enriched them emotionally and intellectually and made them laugh till they cried.

Hal joined Battle, Neal, Harris, Minor and Williams in 1960 and would spend nearly 40 years at the firm that would become McGuireWoods. He made partner in 1966, was Group Leader for Tort Defense, was active in teaching seminars, mentored young lawyers and represented Pro Bono clients his entire career. He was a member of the Richmond, Virginia and American Bar Associations, admitted to practice in State Courts, United States District Courts for the Eastern and Western Districts of Virginia, the Fourth Circuit Court of Appeals and the United States Supreme Court. He was honored to be a Fellow of American College of Trial Attorneys and a Member of their State Committee. He was a member of the Virginia Trial Lawyers Association (President 1984-5), and a member of Virginia Association of Defense Attorneys (President 1985-6). He was Regional Vice President of The Defense Research Institute and served on the Board of Directors. He was a Member of The Federation of Insurance & Corporate Counsel and Third District Ethics Committee Chairman. In 2006 he received the VADA’s Award of Excellence in Civil Litigation. He lobbied before the Virginia General Assembly and was recognized in Best Lawyers in America many times. He went to work in suits made at Nathan’s and would hang his jacket on the newel post at the bottom of the stairs at the end of every day.

In retirement, Hal returned with Reba to Gloucester County, buying and restoring an old river house on Ware Neck called Baiae. Hal loved its screened porches and river views, its low tides and birdsong, the daffodils in Spring, the space it gave the dogs to run and the fact that there was always a Crepe Myrtle somewhere that needed pruning.

Hal McVey was generous with the people and causes he believed in. He served on the Richmond Commission on Architectural Review from 1985 to 1995, was a Member of the Fan District Association, and a longtime patron of the Richmond Symphony. He attended Richmond’s Second Presbyterian Church his whole life and in his later years would occasionally drive up on Sundays from Gloucester for a “faith lift.” When his sons played for the Saints, he’d leave work early to be there with a hug when they left the field or the ring, win or lose.

He loved his dogs, a series of English Boxers named Heidi, Morgan, Blake and Mac. He was a lifelong fan of the Washington Redskins and preferred Frank, Sonny and Sam’s gleefully biased banter to the neutral TV announcers. He was a good sailor and a talented carpenter, building bookcases, radiator covers, a doll house and a deck with a trap door behind the house on Hanover. When he hit his thumb with a hammer, he would occasionally take the Lord’s name in vain, and when he had something important to impart to his children, he would lower his voice and fix them with a steady gaze over the tops of his glasses. He always sneezed in multiples of three, and when he did it would shake the whole house.

Hal was preceded in death by his parents, Henry Hanna McVey Jr. and Eva Jennings McVey. He is survived by his wife, Reba Robinson McVey; his daughter, Margaret McVey Singleton (John); his sons, Lewis Lawson McVey (Deborah) and Ian Douglas McVey (Theile); his five grandchildren, Robert, Henry, Molly, James and Callum; his brother, George Jennings McVey (Nan), and his many cousins, including the much beloved Elizabeth Fitzgerald Wallace.

The family wishes to thank the staff at Williamsburg Landing Memory Support and Health and Rehabilitation Center and Heartland Hospice for their devotion and caring in Hal’s final years. A special thank you goes to Amy Fradenburgh of Gloucester, who has been the best of friends to Hal and Reba and to their family who are forever grateful.

A memorial service will be held at a later date.

In lieu of flowers, the family suggests donations in Hal’s memory be made to the Alzheimer’s Association, the McVey Memorial Scholarship Fund at Hampden-Sydney College or a charity of your choice.