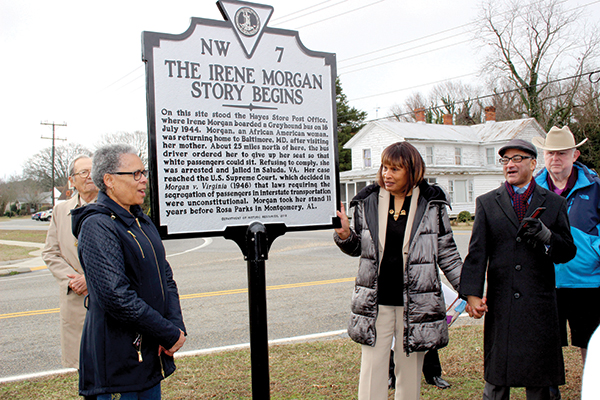 A state historical marker that honors the late Irene Morgan was dedicated Saturday in front of a large crowd that gathered at the marker’s location at 2425 Hayes Road in Gloucester.

The marker, issued by the Virginia Department of Historical Resources, was unveiled by Morgan’s daughter, Brenda M. Bacquie, and her niece, Cleo Warren. Ben Borden, a longtime Hayes resident and Hayes Post Office patron, was also on hand.

The marker’s text, composed by Dr. Dorothy C. Cooke of Gloucester, who presided over the dedication program, is titled “The Irene Morgan Story Begins” and reads as follows:

“On this site stood the Hayes Post Office, where Irene Morgan boarded a Greyhound bus on 16 July 1944. Morgan, an African American woman, was returning home to Baltimore, MD, after visiting her mother. About 25 miles north of here, the bus driver ordered her to give up her seat so that white passengers could sit.

“Refusing to comply, she was arrested and jailed in Saluda, VA. Her case reached the U....