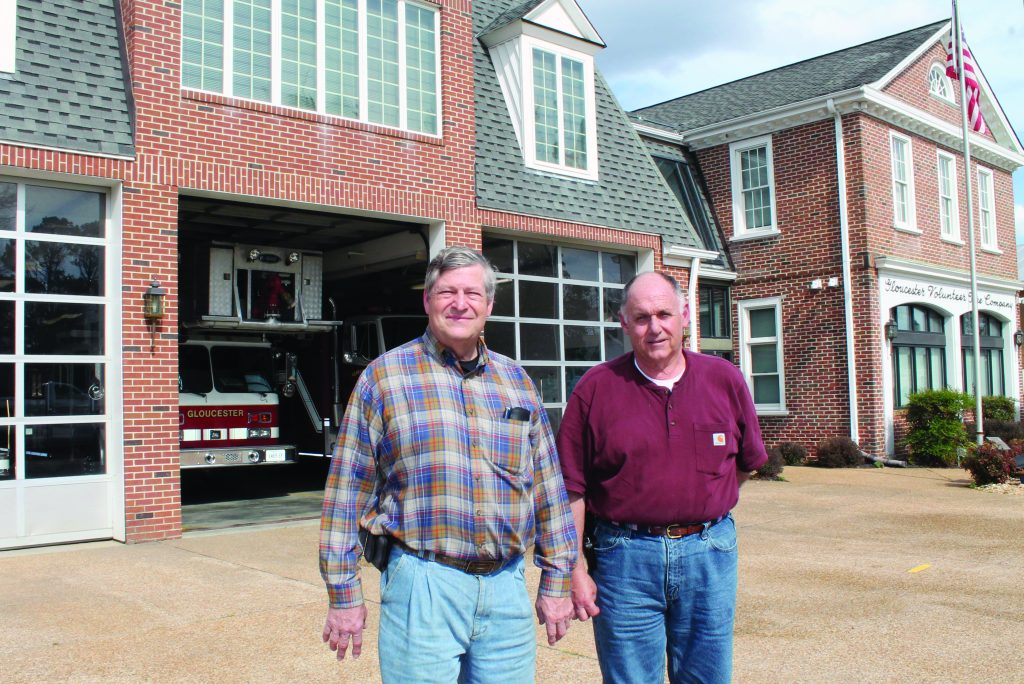 SHERRY HAMILTON / GAZETTE-JOURNAL Lewis Horsley, left, and J.D. Clements of Gloucester Volunteer Fire and Rescue Squad recently shared their thoughts on the department’s efforts to move forward with building a new Station 1 on the old Booker properties on Main Street.

Hazardous and heartbreaking situations have been regular fare for Gloucester Volunteer Fire and Rescue Squad Chief J.D. Clements and Treasurer Lewis Horsley over the years.

Just like fire and rescue personnel everywhere, they know what it’s like to respond to a call not knowing if they’ll be saving someone’s home or someone’s life or putting their own lives on the line.

As members of a primarily volunteer department, not only do the two men and their fellow GVFRS members handle calls, keep up with training, and maintain equipment and infrastructure, but they’re also taxed with governing themselves. The members elect officers and board members who do their budgeting, purchasing, planning for the future, and a myriad other activities that would fall to paid staff in a paid-only department. Beyond that, they annually raise funds to pay for the department’s increasingly expensive operating costs.

“We’re the only agency the county funds that, if we stop, it will end up costing the county a whole lot more than it costs now,” said Horsley. “We want to save money all the way around the road.”

Like their fellow firefighter/medics, Clements and Horsley aren’t prone to pat themselves on the back or complain when the going gets tough, but they find it disheartening when their efforts are second-guessed. They hope the community they love and serve will trust them to make decisions about their department’s future, including the location of their planned new building.

A study the department conducted on where to place the new building showed that Main Street is “the most plausible location we can have,” said Clements. He said probably 70 percent of the calls Station 1 responds to on a regular basis are located in the Court House area, where several assisted living facilities, nursing homes, and age-targeted subdivisions are located, including the Fiddlers Green complex and the new Main Street Landing subdivision planned for the intersection of Main Street and the bypass.

Then there’s accessibility for the volunteers, many of whom respond from their homes or places of business as back-up for the on-duty crew during an emergency. A central location on Main Street reduces the number of traffic lights a volunteer encounters on the way to the station, said Clements, thus shortening response times.

While it has been suggested that the firehouse should be located someplace outside of the downtown area, Clements said that downtown businesses want to draw people to Main Street, and he believes having a firehouse on Main Street does just that. In addition, Clements said he feels a Main Street location gives residents access to the department they wouldn’t have elsewhere. The station is open during festivals and parades, allowing the department to familiarize young people with the equipment and gear used by firefighters and medics and teaching them basic safety techniques. It’s not unusual to see children stop by and look at the fire trucks through the bay doors, and staff are encouraged to let them in. It’s a valuable teaching tool that children enjoy, said Clements.

“If we lose that tool, it will hurt the community in the long run,” he said.

Last year, after extensive inter-departmental discussion about the decreasing functionality of Station 1 on Main Street, and after much research and consultation with an architectural and engineering firm at a cost in the six figures, the department decided to purchase the old Calvin Hotel, Tri-County Furniture Store, and the former Booker home on Main Street. The functionally designed hotel and furniture store didn’t appear to have any architectural significance, said Clements, and it didn’t seem as though anyone was interested in them.

“If someone wanted to buy them for some other use, why didn’t they step up and buy them?” he said.

The plan is to demolish the three structures, the department hopes later this year, and build an entirely new facility at the site. GVFRS members had come to the conclusion that a new building on a different site was the only viable option to provide the best service to the county over the long term.

“We have outgrown this building, and it does not meet NFPA standards for fire houses,” said Clements. “We have spent an incredible amount of money and time trying to make an appropriate decision in regard to the future as far as new facilities.”

Clements said the current Station 1, which has been added onto numerous times since it was built in 1954, doesn’t provide adequate separation between the crew’s living quarters and the bays where the fire apparatus and medic units are housed. While fans are used to try to vent the fumes from the exhaust, he said, some of it still escapes into the living quarters.

“Our people are our biggest asset,” said Clements. “We need to provide an atmosphere that’s safe.”

In addition, there is no appropriate place to store, launder, and dry firefighting gear. It must be washed after use at structure and automobile fires to remove carcinogens, and a special washing machine must be dedicated to that use.

There is not room for one at Station 1, so all the gear has to be hauled to the Harcum station for laundering. This takes the gear and the firefighter out of service for at least eight hours.

On top of all of that, the typical size of fire and rescue vehicles has increased over the years, and there isn’t enough room in the bays to offload equipment for cleaning and maintenance or on the ramp for engines and ambulances to back safely into the bays. They have to project onto Main Street as they maneuver backward to park.

Trying to renovate or replace the current station would disrupt service for 18 months to two years, said Clements. On top of that, a temporary storage building would have to be built for the station’s apparatus at a cost of $1.2 million. That didn’t make much sense to department personnel, who have taken great pains over the years to be frugal with the money they receive from faithful donors and from the county through taxpayer funds.

How the transition will be accomplished

The fire department has always tried to be a good Main Street neighbor, said Clements, so every effort will be made to remove the existing buildings in the safest manner possible. Asbestos abatement has already been taken care of, and the department has a certificate to attest to that, he said.

With each addition to the current station, fire department personnel have made sure the appearance of the building has blended in with the architecture on Main Street, said Clements, and he emphasized that just as much care will be taken with the new facility.

“We want to build a facility that will serve the community for 50 years,” said Clements. He said the structure needs to be able to accommodate career staff so there can be a seamless transition if the department has to go all career in the future.

In terms of funding, the department plans to borrow the money for the building and spread out the payments with support from the county, said Horsley.

Although the Calvin Hotel has fallen into disrepair and disuse, during its heyday in the late 1950s and early 1960s it had a close relationship with the fire department, said Clements. All fire calls went to the hotel, he said, to a telephone in the back of the building, near the alleyway. The call would be taken by the person who was on duty, and that person would activate the downtown siren by flipping a switch in the hotel while calling the firehouse to provide details about the call.

The telephone and the switch are still there, he said. Although there’s nothing remarkable about them, the plan is to put them on display in the new facility.

“We’re not here to destroy history,” said Horsley. “We’re here to provide a service to the community that benefits everyone. And we feel like Gloucester Court House should be the center of our operations. In a rural community, a firehouse is almost as prominent in the center of town as anything going … There’s no reason we can’t maintain the aesthetic balance of Main Street and have a new station too.”

Clements expressed pride in the fact that the department was the “only one between the York River and the Potomac” that combined its fire department and rescue squad in 1967, when the state mandated that localities provide rescue services. He said that decision, which led to many members being cross-trained in both fire and rescue, had enabled the rescue side of the department to maintain a strong volunteer base that provides all rescue services from 6 p.m. to 6 a.m. and supplements paid staff in the daytime.

“We’re providing a vital link in the public safety chain,” said Clements. “I think the majority of the community understands our reasoning. I hope they’ll get on the bandwagon and support us. But it they choose not to support us monetarily, I hope at least they don’t impede us.”