Governor moves ahead with plans to remove Lee statue 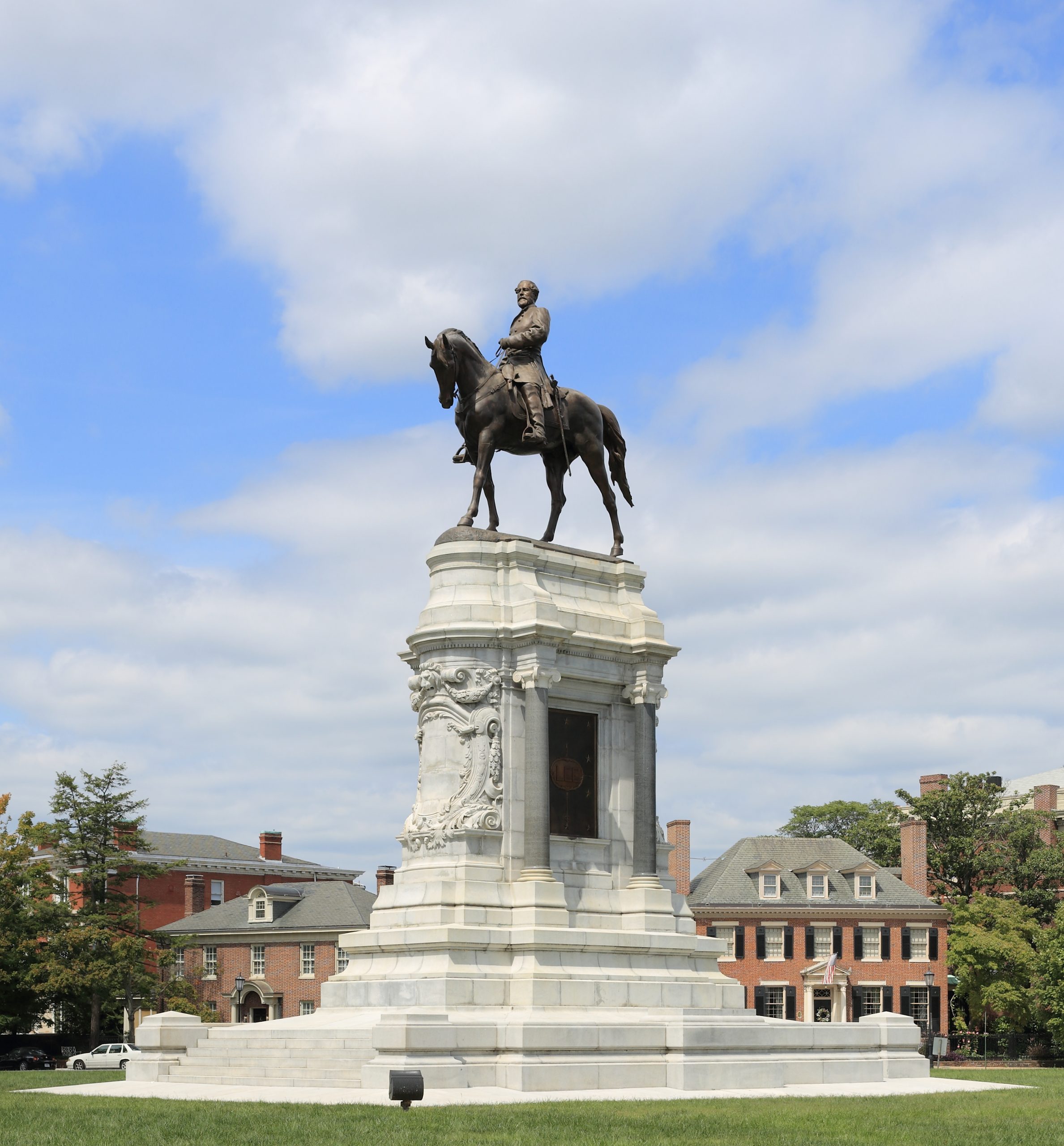 Gov. Ralph Northam announced on Thursday morning that the statue of Confederate Gen. Robert E. Lee on Monument Avenue in Richmond would be removed and placed in storage in an appropriate location as soon as possible.

Northam’s decision was met with approval by his fellow Democrats and varying degrees of condemnation from Virginia Republicans.

The governor said his administration will work with the community to determine what to do with it, and there will be further discussion about the future of the pedestal on which the monument stands, including whether to place another statue there.

Unlike other statues along Monument Avenue, which are owned by the City of Richmond, the Lee statue is owned by Virginia, said Northam. Because the statue is a work of art, he said, the governor has sole authority to approve its removal.

In opening remarks, Richmond Mayor Levar Stoney said that Richmond is no longer the capital of the Confederacy and that it was time to “put an end to the lost cause and fully embrace the righteous cause” by replacing racist symbols with symbols that reflect diversity and equality.

Northam said he believed that “we have to confront where we’ve been in order to shape where we’re going,” and he talked of the many forward-looking moments that had occurred in Virginia, from the first dreams of “life, liberty, and the pursuit of happiness” to Patrick Henry’s cry of “Give me liberty, or give me death.”

But, he said, at the bottom of the same hill where those words were spoken, one of America’s largest slave-trading markets was built—“A place where Virginians would sell men, women, and children for profit. Americans buying and selling other Americans.”

He recounted the history of black oppression in America, from the original enslavement of Africans, through the Civil War and Jim Crow era, to massive resistance against desegregation and mass incarceration. And he said that the legacy of racism continues “as part of a system that touches every person and every aspect of our lives, whether we know it or not.”

Northam said that symbols matter, too, and that Virginia has more Confederate commemorations than any other state. General Lee himself didn’t want a monument, said Northam, and he quoted the general, who said, “I think it is wiser not to keep open the sores of war, but to follow the examples of those nations who endeavored to obliterate the marks of civil strife, to commit to oblivion the feelings engendered.”

But past Virginia leaders chose instead to keep such “marks of strife” on display, said Northam. He said the statue of Lee was built in France in May 1890, 20 years after Lee died, and it was installed in a field by business people “so they could eventually build a housing development around it and make money.”

“There was no secret about what the statue meant,” said Northam. He said 150,000 people came out for its unveiling, and that most of them were waving Confederate flags.

The six-story statue was placed in a 100-foot circle of land, said Northam, and “it towers over homes, businesses, and everyone who lives in Richmond—from elegant Monument Avenue to the public housing neighborhood of Gilpin Court.”

More statues went up throughout the South, said Northam, “And as the statues went up, so did lots of new laws. It was all part of the same campaign”—a campaign to disenfranchise black people and “undo the results of the Civil War.” As one example, he said that more than 100,000 African American men were registered to vote in Virginia in the years following the Civil War, but during the campaign new laws were passed to limit the right to vote, and the number of voter registrations among African Americans “plummeted by 90 percent, to barely 10,000.”

During that same period, laws were passed making it unlawful to remove the statues, said Northam, and those laws remained in place for over a century.

“But voting matters, and elections matter,” said Northam, “and laws can be changed. And this year, we changed them.”

Now, he said, a new law enacted by the General Assembly will go into effect in four weeks, and cities and towns will be able to decide for themselves what to do with their monuments.

“In Virginia, we no longer preach a false version of history,” said Northam. “One that pretends the Civil War was about ‘state rights’ and not the evils of slavery. No one believes that any longer. And in 2020, we can no longer honor a system that was based on the buying and selling of enslaved people … So we’re taking it down.”

The Rev. Robert W. Lee IV, who is a descendant of Confederate general, asked those who doubted whether it was the right time to remove the statue, “When will be the right time to address racism and white supremacy?” He said his ancestor was a complex man, “but a man of his times who fought to continue to enslave black people,” and that, as Lee’s descendant, he supported the statue’s removal.

“The statue is a symbol of oppression and an idol, and the idols must be torn down,” he said. “This is the start of a new moment—a new cause of equality, justice, peace and concord.”

Johns, whose great-grandmother was the originator of the Brown vs. Board of Education suit that resulted in school desegregation, said the statue was a symbol of “hate, bigotry and division,” and that “we’re walking in a new era of respect and inclusion.” He encouraged those protesting inequality to vote because “this is what it’s going to take.”

Fairfax praised Northam’s “courageous leadership” and his willingness to “stand up as one voice.” He said there were also other monuments to the 400-year history in Virginia since “the first Africans were forced to land,” including substandard schools, a broken healthcare system, substandard housing with high eviction rates, and a broken criminal justice system.

Herring said that the past few days had been painful and had forced white Americans “to face the privilege our skin color gives us.”

“The weight that is placed on people of color is unforgiveable,” he said. “No one should live with the fear that their children will be killed if they go for a walk or run an errand. We must build a country that’s fair and safe and just for all.”

Herring said that the “grandiose monuments memorializing a racist insurrection do not deserve to stand,” and that the way a nation tells its history matters.

“When you’re surrounded by symbols of race, they reinforce the notion of a hierarchy of race,” he said. “How do you explain that to children?”

Bryant, a university student who wrote the original petition for removal of the Lee statue in 2016, said that “It’s no longer okay to walk away from tough conversations or racist dialogue because you don’t want to cause controversy.”

“Lives are on the line,” she said. “Our future is on the line. Black lives matter.”

In response to the announcement, the Virginia Senate Republican Caucus, led by Sen. Thomas K. Norment, who represents Gloucester among other area localities, released a statement decrying the removal of the monument.

While members of the caucus were “outraged and deeply saddened by the murder of George Floyd …(and committed to) ensuring our criminal justice system is fair to all,” it said, “the governor’s decision to remove the Lee statue from Monument Avenue is not in the best interests of Virginia.”

The statement said that attempts to eradicate history rather than contextualize it “invariably fail” and “like Senator Chase’s idiotic, inappropriate and inflammatory response, (Northam’s) decision is more likely to further divide, not unite, Virginians.”

Norment was referring to a statement from State Sen. (and 2021 gubernatorial candidate) Amanda Chase. In it, Chase said that “removing the Robert E. Lee statue is a cowardly capitulation to the looters and domestic terrorists. If the state is unable to defend a monument weighing several tons in a well-lit area, what hope do citizens have of the government protecting their houses and businesses? Instead of appeasing the left-wing mob Northam’s surrender will only lead to future calls to erase Founding Fathers from the public and our history books. Ralph needs to reverse course!”

U.S. Sen. Tim Kaine tweeted about the decision that “It’s time. These statues are not just reminders of a painful past, but symbols of a painful present and even harbingers of a difficult future. The Governor’s action answers a question: Why glorify those who fought to keep people in bondage because of the color of their skin?”

Virginia’s Legislative Black Caucus, which is made up of 23 members of the General Assembly, issued the following statement:

“The announcement of plans to remove the Robert E. Lee statue on Monument Avenue is a step in the right direction in the continued fight to address institutional racism, systemic disparities, and remaining vestiges of Jim Crow in our commonwealth. These Confederate monuments are a symbol of racism, oppression and hate.”