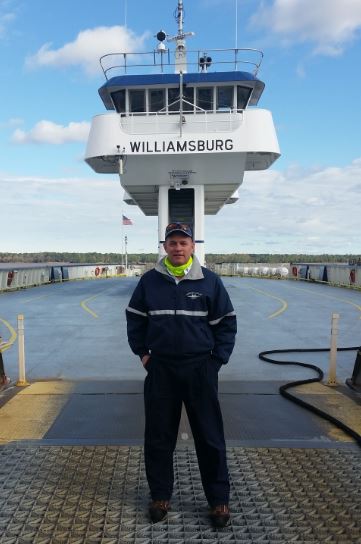 George “Wes” Ripley has worked for the Virginia Department of Transportation for 33 years on the Jamestown-Scotland Ferry.

George “Wes” Ripley has spent the past 33 years working for the Virginia Department of Transportation on the Jamestown-Scotland Ferry.

Ripley resides in Gloucester and is originally from Mathews where his family has lived since the 1600s. His family has been in the marine business for the past four generations, dating back as far as his great-great-grandfather.

In 1987, Ripley joined VDOT as a mate and became captain two years after that in 1989. In 2009, Ripley became the facilities manager for the Jamestown-Scotland Ferry.

In 2012, Ripley met and got the autograph of his favorite actor, Brian Cox, when he traveled on the ferry. Last year, Ripley was on the ferry when the “Real Housewives of the Potomac” filmed onboard.

According to Nina Ullrich, Senior Communications Specialist at VDOT, Ripley was instrumental in garnering $4.19 million from a U.S. Department of Transportation’s Federal Transit Administration grant to replace the dolphins, which are pilings that guide th...