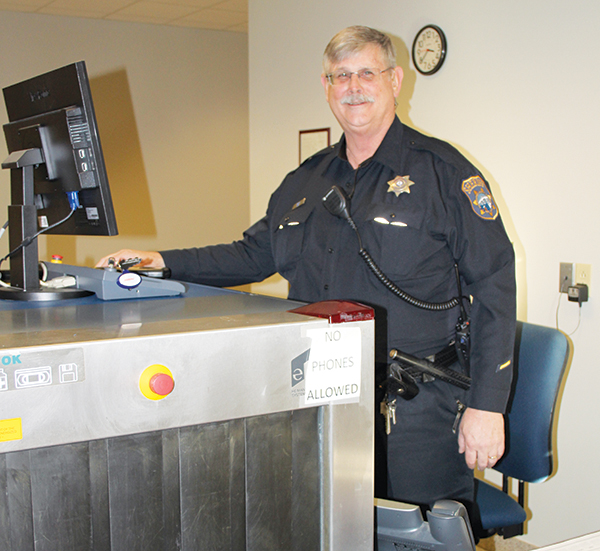 Gloucester Sheriff’s Deputy Tim Knight, above, was wearing his new navy blue uniform as he greeted visitors to the county courthouse this week. The sheriff’s office recently transitioned to the new uniforms and away from the previous “air force blue” shirts. Photo by Kim Robins

Gloucester Sheriff Darrell Warren said the new uniforms are competitively priced and his officers can wear the dark navy with their current winter jackets, neckties and campaign hats.

Warren said the replaced uniform, introduced in 2010 by a former sheriff, included an “air force blue” shirt that is no longer available because the manufacturer went out of business in 2018.

One of reasons for going with the dark navy alternative, Warren said, is that it is more traditional for law enforcement and it is made by several manufacturers so the pricing is very competitive. “My office was able to purchase the new uniforms under state contract pricing so we maximized savings,” he added.

When the switch was made to the former uniforms, Warren said it cost about $80,000. This time, new jackets, ties and hats were not needed and the dark navy uniform overall is less expensive ...