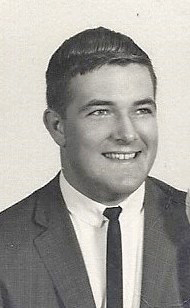 Marshall was born in Gloucester to Leslie and Evelyn Lewis. He was a fine southern gentleman who lived life to the fullest and loved to make people laugh. He befriended his sweetheart, Bonnie, at a young age and they ultimately wed in 1962. Shortly after, Marshall enlisted in the U.S. Coast Guard where he served his country for 30 years, retiring as a Lieutenant Commander in 1992. After his military retirement, he worked in the Virginia ABC stores for many years. Marshall was also a member of the Achilles Masonic Lodge, AF & AM 281, Khedive Temple of the Shriners, Tidewater Past President & Royal Order of Jesters.

Marshall was preceded in death by his parents. He is survived by his wife, Bonnie Lewis; daughter and son-in-law, Marsha and Ashby Morgan; son and daughter-in-law, Robert and Stacey Lewis; sisters, Carolyn Broadwell and Melissa Ware; grandchildren, Phillip Morgan, Adam Morgan, Kyle Lewis, Megan Phelps, Sydney Hockaday, Ashton Lewis, and Avery Lewis, and seven beautiful great-grandchildren. Marshall is also survived by nieces, nephews, cousins, and many friends that he influenced throughout his life.