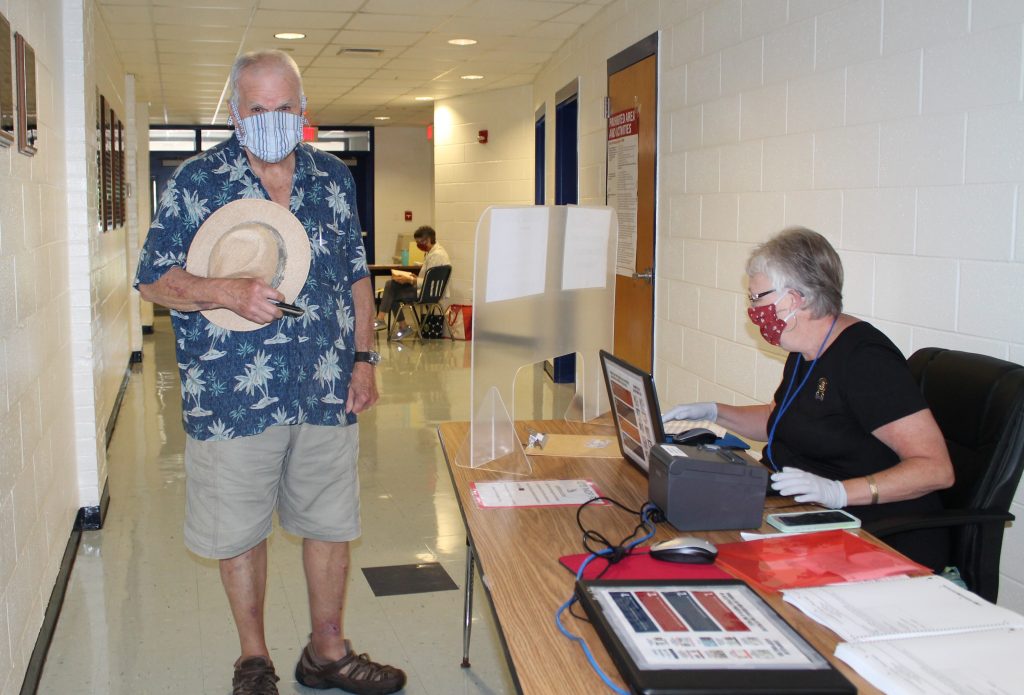 SHERRY HAMILTON / GAZETTE-JOURNAL Neil Webre, left, of Cobbs Creek, provides his photo ID to Piankatank Precinct Election Official Patsy Brooks in order to be allowed to vote in Tuesday’s primary election. This is the last Virginia election in which photo identification will be the only form of identification a voter may use. A law passed this year by the General Assembly allows for other forms of ID to be used, as well, including voter registration confirmation documents, a U.S. passport, a student or employee identification card, or a utility bill, bank statement, government check, or other document that shows the voter’s name and address.

Gade will face off against incumbent Democrat Mark Warner for Senate, while Rashid will oppose Rep. Rob Wittman (R-Montross) in the fall election.

Gade, a retired U.S. Army lieutenant colonel and professor at American University in Washington, D.C., soundly defeated his two opponents, receiving 67.47 percent of the vote statewide, compared to 18.08 percent for Alissa Baldwin and 14.45 percent for Thomas A. Speciale II.

The Democratic race for the 1st Congressional District seat was much closer, with Rashid, an author, human rights activist and attorney who lives in Stafford County, winning by a margin of 52.87 percent (21,718 votes) to 47.13 percent (19,362 votes) for Williams, with 99.18 percent...