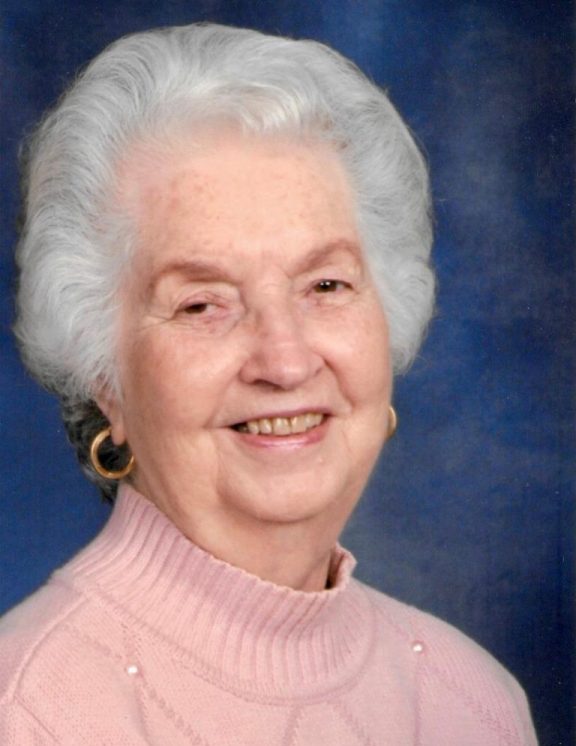 There was so much love in the room when our sweet mother, Frances Isabelle Hughes, passed away. Surrounded by three generations of her family, her life ended peacefully on Nov. 11, 2021.

Her family was raised in the hollers and coal camps of her beloved mountains of southwest Virginia. She considered herself a fortunate child of the Great Depression and frequently spoke, with such fondness, of her simple childhood. Her family’s lack of means was never a source of shame. Instead, Mom claimed how her mountain upbringing was a source of many happy memories and was the foundation of her learning many useful, lifelong skills. These talents were the things that our mother would eventually become best known for.

One of the most pivotal moments in our mother’s life was the day she arrived as the “new girl” at Tazewell High School. As she walked into class for the first time a handsome young football star made eye contact and passed along a wink. In that moment her life was forever changed. Thus was the beginning of a romance with our father, James Hughes, that lasted their lifetimes. Immediately upon graduation, they married and until our father’s passing in 2020, this unbreakable covenant endured over 68 wonderful years. They were completely committed to one another’s happiness, security and well-being, with God being at the center of their lives.

The hardships of earning a living in southwest Virginia forced them to reconsider their future. So soon after marriage, they pursued a better life in a seemingly foreign place called Tidewater Virginia. They lived the majority of their lives in Yorktown where they raised three children, Gordon (Beverly) Hughes of Suffolk, Terri (Danny) Joyce and Karen (Stephen) Smith, both of Gloucester. They were the most wonderful parents but of their life’s greatest joys were their grandchildren, Amanda, Jason, Kasey, Whitney, Evan and Ryan, as well as seven great-grandchildren. How very blessed their “grands” were to have had such loving and involved grandparents.

Mom drove a school bus for York County Public Schools for many years. She enjoyed that profession very much but making a home was all she ever really wanted to do. It was at home where her many creative talents blossomed.
Mom loved experiencing the slow correction that seemed to be underway. That is, a return to the old ways. No one realized the true value in these things more than she. She clung to the traditions of her youth and canned anything that would fit into a Mason jar. She became an expert quilter and created intricate pieces of needlework. As children, she kept us, and herself, adorned in the most beautiful clothes, all handmade by her. She created a comfortable home surrounded by gardens filled with azalea, camellia, rhododendron and countless perennials and annuals. But her kitchen is where she shone the brightest as it became much like the Biblical story of the fishes and loaves. It kept giving and giving. Mom made a conscious effort in her daily life to extend kindness, grace and comfort, and she usually did that through her renowned cooking skills. Anyone who knew her was likely the fortunate recipient of her genuine southern hospitality; moreover, of her very delicious, made-from-scratch food.

Mom had the most pure and genuine faith in Jesus Christ, a life which consistently honored God and resulted in actions that demonstrated her faith. She kept God centered in her life, not only during times of sadness or desperation, but in times of peace, as well. She never stopped believing in the innate goodness of mankind. She kept her word and her commitments, fully, and we are not aware of anyone she ever knowingly hurt, betrayed or insulted. Her sort of goodness was so very rare.

Mom also believed there is value in life’s challenges and changes, and that we should embrace these events as an opportunity to become fruitful. Little did we know how painfully poignant we would rely upon her counsel as we began to witness the slow decline and disappearance of our mother, someone we loved so dearly. Dementia is a terrible thief that spreads suffering. But Mom prepared us to bear such burdens.

And now, as we prepare to gather for Thanksgiving, rather than mourn her life, it feels appropriate to count our blessings for having had a mother who lived such an exemplary life. She wished to be known for her love of family, her love of God and her kindness and generosity. We are exceedingly grateful and will forever cherish the memories that her wishes for her legacy were so fully met.

Her Celebration of Life was held on Wednesday at Bethel Baptist Church, 1004 Yorktown Road, Yorktown, Va. 23693. Visitation began at 10 a.m. and her service was at 11 a.m. Burial followed at Peninsula Memorial Park, Newport News.
Should you wish to wish to honor our mother’s memory, thank you in advance for donations in any amount to Riverside Walter Reed Hospice, 7358 Main Street, Gloucester, Va. 23061.