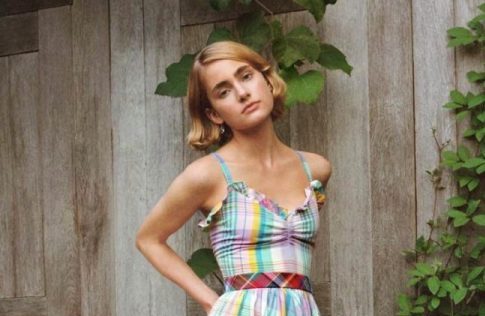 Former Mathews resident Camille Bavera models a Ralph Lauren dress during the introduction of the designer’s spring Polo collection in New York. The dress, made of lightweight cotton in a pastel madras pattern, has “a ruffle trim at the neckline and delicate shirring at the bust,” according to the catalog description.

Camille Bavera of New York, formerly of Mathews, has launched a modeling career in New York City, finding that the work requires long hours but is fun and fulfilling.

The 19-year-old granddaughter of Beth Lewis of North signed on last summer with Modeling for Women Management and had her first job in October, modeling for Ralph Lauren’s spring Polo campaign.

Bavera said she and several other models traveled to a plantation-style home in upstate New York for the daylong shoot, leaving at 4 a.m. and returning at 10 p.m. The theme was “garden party,” she said, so it involved wearing a lot of long, feminine dresses that were introduced in March on numerous platforms, including in stores and on Ralph Lauren’s website and social media apps.

Since then, she has shot a campaign for Rebecca Taylor’s ready-to-wear brand, for a multi-product display in Harper’s Bazaar, and for a tribute to the late model Stella Tennant by South China Outpost that ran in Vogue.