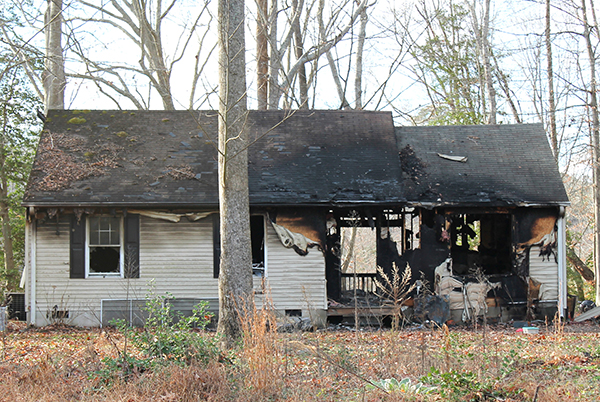 Fire destroyed this home on Windsor Road in Mathews early Saturday morning. The family of four managed to make it out, but three dogs died. Photo by Sherry Hamilton

Fire destroyed a house on Windsor Road in Mathews early Saturday, leaving a family of four with little but the clothes on their backs.

Mathews County Fire Chief Ronnie Lewis said the fire department received the call at 2:20 a.m. on Saturday and arrived with fire showing in the front of the house. The family—a father, mother, and two children—had all escaped, he said, but three dogs and an unknown number of pet snakes died in the conflagration. One pet snake was saved. The owners said that a smoke detector awoke them, enabling them to escape.

The fire began in the back corner of the kitchen, said Lewis, but it was so badly burned that there was nothing left to determine the cause. He said the house was a total loss, and guessed that the value of the home and its contents was somewhere in the $200,000 range.

Three engines, a tanker, a rescue truck, and around 15 firefighters responded to the fire, said Lewis. They were on the scene until 5 a.m.

CORRECTION: This article was amended t...