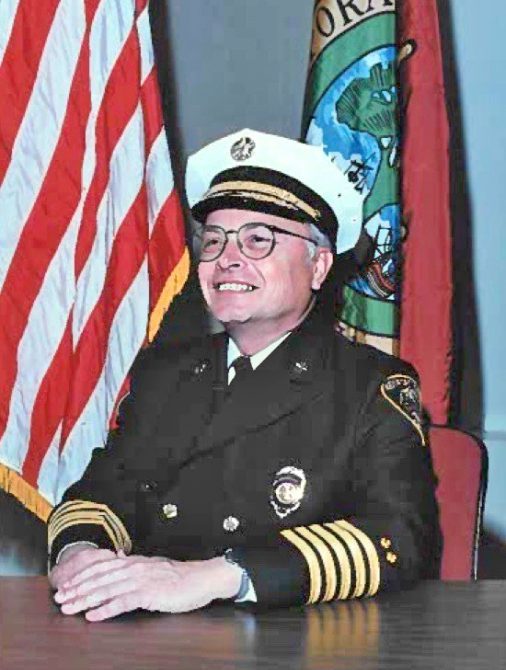 Clarence Waverly Hilling, 87, responded to his last call on Tuesday, March 22, 2022. Clarence was a Minister of the Gospel, and retired as Fire Chief for the City of Newport News.

Clarence was born in Newport News to the late Harry S. Sr. and Catherine Virginia Gwaltney Hilling. He attended Stonewall Jackson School, Newport News, for his elementary education and then on to Newport News High School graduating in 1953. He graduated from Bluefield College with an associate’s degree in 1955. Clarence furthered his education at the University of Richmond, graduating with a Bachelor of Arts degree in 1959. In the fall of 1959, he attended Southeastern Baptist Theological Seminary in Wake Forest, N.C., from which he graduated in the spring of 1962.

Clarence would have been the first to tell you that the Lord directed the ways of his life, and he saw God’s hand leading him in all aspects of life; his favorite scripture passage being Romans 8:28-39. He was called in 1962 to be the pastor of Beech Grove Baptist Church in Gloucester, where he remained until 1967, at which time he began serving as the interim pastor for a brief time at Beulah Baptist Church in Ware Neck. In 1967, his life took another direction and he was employed by the City of Newport News in the Bureau of Building Inspections (which is now Codes Compliance) and he eventually reached the position of Chief Housing Inspector. The year 1977 brought further changes in Clarence’s career when he was hired by the Newport News Fire Department as a Fire Inspector/Fire Investigator, where he remained until 1981 when he was promoted to Fire Marshal. On March 8, 1990 he was promoted to the position of Fire Chief of the Newport News Fire Department. He remained as Fire Chief until his retirement from the City of Newport News on April 1, 1991.

During Clarence’s career following his pastoral ministry, and even after retirement, he was still very much involved in ministry of the church and the ministry of serving others. Over the years, he performed many wedding ceremonies as well as worked for many area funeral homes performing funerals for those who were without a minister to serve them during their time of need. Another area Clarence was involved in was helping his brother Bobby in his business, Trophy World, in Hilton Village. He thoroughly enjoyed his time there helping wherever and whenever needed.

In addition to his parents, he was preceded in death by two brothers, Harry S. Hilling Jr. and Billy Hilling; his sister, Mary Jane Hilling Carter, and nephew, John Carter. Survivors include his brothers, Charlie Hilling and his wife Annette, and Bobby Hilling; two sisters-in-law, Mary Lou Hilling and Ann Hilling; numerous nephews, nieces, great-nephews and great-nieces, and many, many friends.