Borden steps down after 27 years 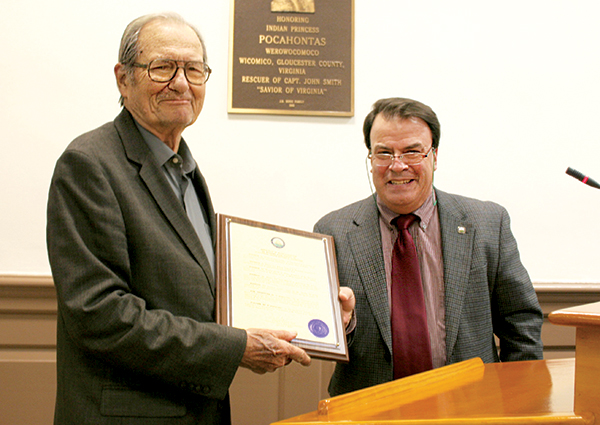 Benjamin Borden Jr., left, is presented with a resolution to commend his 27 years of dedicated service to the Gloucester County Historical Committee by Phillip Bazzani, chairman of the county board of supervisors. Photo by Tyler Bass

Benjamin Borden Jr. has served on Gloucester County’s Historical Committee since 1992. He was appointed by Supervisor W.E. “Noody” Belvin that year, and has stayed on as a dedicated and valued member of the committee.

However, after 27 years, Borden has decided to step down as an official member of the Historical Committee. On Feb. 4, Borden was thanked for his years of service, with county supervisors presenting him a resolution of thanks, commending him for his nearly three decades of service.

Borden, doesn’t consider himself a big history buff. He knows a lot because he’s seen a lot, and has done his best to be a good steward of that knowledge. According to Borden, when he was first appointed to the committee, he “found it to be very interesting and had a lot of super people to work with.” The work, and the people, made saying “yes” to staying on easy, and the years just began to fly by.

Borden has many fond memories from the last 27 years. Some of Borden’s favorite days, “...