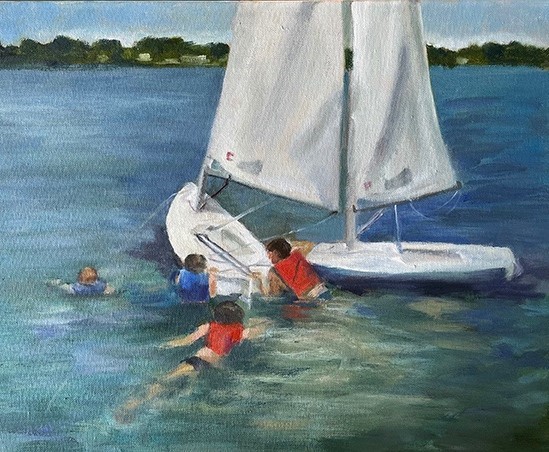 “Memories from the Pier” (pictured above) is one of the paintings by Lois Biddison currently on display at the Bay School Community Arts Center in Mathews. Biddison is the center’s artist of the month for July.

The July Artist of the Month at the Bay School is Mathews artist Lois Biddison. Her exhibit includes seven paintings and notecards printed from her artwork.

Biddison paints for enjoyment, letting the colors and shapes define the work, said a press release. She said her favorite paintings painted themselves because the shapes seemed to connect and tell her where to go. Her favorite subjects are water related, but she also likes still life.

Biddison studied graphic arts in college, said the release, and she began her graphic art career with a part-time job in print production. This was followed by advertising at three different agencies and one corporation. In 1987, she opened a small advertising and marketing company of her own.

Biddison grew up in Mathews ...