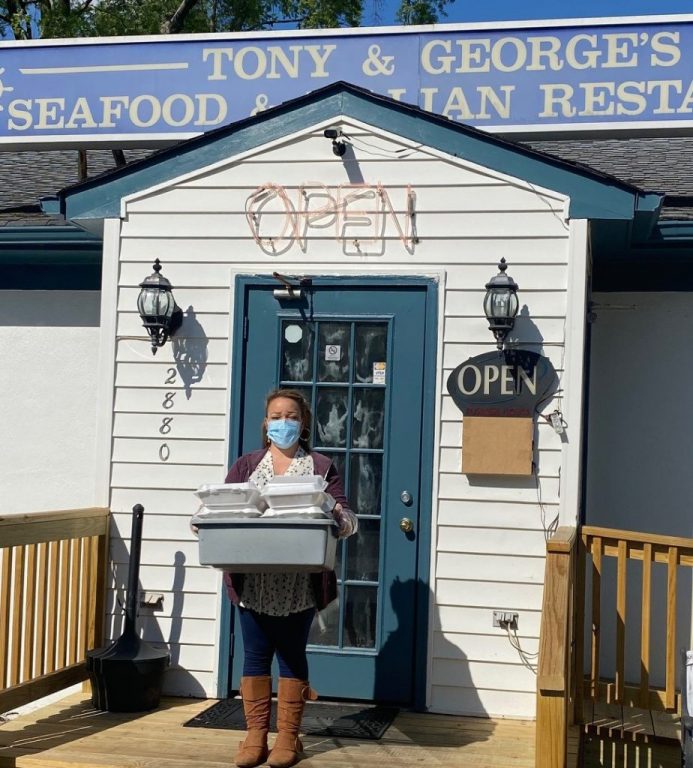 In an effort to support seniors, and those with underlying health conditions, to stay in their homes and be safe throughout the coronavirus outbreak, Bay Aging is launching its Helping Neighbors initiative throughout the Northern Neck and Middle Peninsula.

“Beginning next week, we will be delivering nearly 1,300 home-cooked meals per week to area residents who want to stay in their homes and stay safe during this crisis,” said Bay Aging’s Lauren Cobb, who is spearheading the initiative.

A number of people have also signed up for meal, grocery and prescription medicine deliveries through the Bay Aging website, she added. “I’ve been thrilled by the response from area restaurateurs who are eager to help their neighbors.

Combined with volunteers from church and civic groups, you really get a sense of the powerful community spirit that has emerged during this crisis.”

“The best people to help their communities are those within them,” said Kathy Vesley, President/CEO of Bay Aging. “We also launched Helping Neighbors in support of area businesses. We were very intentional about partnering with local restaurants as COVID-19 is clearly both a public health and economic crisis. Helping Neighbors will assist in addressing both issues.”

The meals are being prepared by nine area restaurants including Linda’s Diner in Mathews, Olivia’s in the Village in Gloucester, Angelo’s Pizza Co. in Montross, Nino’s Pizza in Callao, Bella’s in Tappahannock and Denson’s Chesapeake Bay Farm to Table restaurant in Colonial Beach.

As Brian Oliff, Angelo’s owner noted, “I’ve made some sound investments in my life but the one that yields the greatest return is helping people in need. We’re going to be preparing fried chicken, fresh fish, beef dishes and lots of fresh vegetables. It will be a really varied and healthy menu all made with love.”

Helping Neighbors was pilot tested last week in West Point when the appreciative residents of Bay Aging’s Winters Point senior apartments were treated to delicious home-cooked meals donated by Tony & George’s Seafood & Italian Restaurant. The meals were delivered by head waitress Carmen Mayfield, who has worked at Tony & George’s for more than 15 years.

Mayfield, clad in a protective mask and gloves, greeted residents with the enticing aroma of fried chicken, mashed potatoes with gravy, green beans, a warm dinner roll and a homemade brownie for dessert. “The Winters Point residents gave us a card thanking us for our kindness,” she said. “It was lovely seeing the appreciation on their faces.”

“During this time of crisis, we wanted to do something for the people in our community, so we chose to feed the seniors at the Winters Point apartments,” said Tony Ashikis, co-owner of the restaurant.

The Helping Neighbors program pairs community volunteers, such as Tony & George’s, with those in need of assistance. Helping Neighbors fliers have been distributed to all Meals on Wheels clients and residents of Bay Aging’s income-restricted senior apartments as a first step to building awareness for this initiative. The fliers are also being shared with the faith community, civic organizations, area radio stations and other stakeholders throughout the region.

For more information about Bay Aging’s services, including Helping Neighbors, visit the Bay Aging website at www.bayaging.org or Bay Aging’s Facebook page. For those without access to the internet, call Bay Aging at 1-800-493-0238.