Battle of Cricket Hill to be commemorated 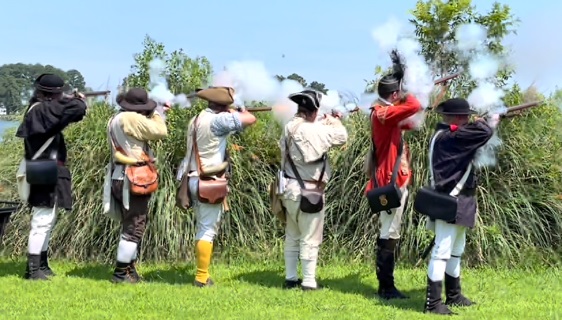 The 246th anniversary of the Battle of Cricket Hill will be commemorated on July 9 with a program at Morningstar Marina, Hudgins. The program will include a VASSAR Color Guard musket firing.

The Virginia Society of Sons of the American Revolution will commemorate the 246th anniversary of the Battle of Cricket Hill with a program beginning at 11 a.m. on Saturday, July 9, at Morningstar Marina, 249 Mill Point Road, Hudgins. The public is invited to attend.

This battle took place when Patriot forces bombarded the British ships at anchor on Gwynn’s Island where John Murray, the Earl of Dunmore, the last Royal Governor of Virginia, had landed and set up camp after being deposed in Norfolk. This was a signal victory for the Patriots mere days after the Second Continental Congress adopted the Declaration of Independence.

The celebration, hosted by the James Monroe and Richard Henry Lee chapters of Virginia SAR, will include a keynote address by Patrick Hannum, a longtime writer/contributor to the Journal of the American Revolution, a VASSAR Color Guard contingent in American Revolutionary War uniform, Color Guard musket fire, and a wreath-laying ceremony.
...