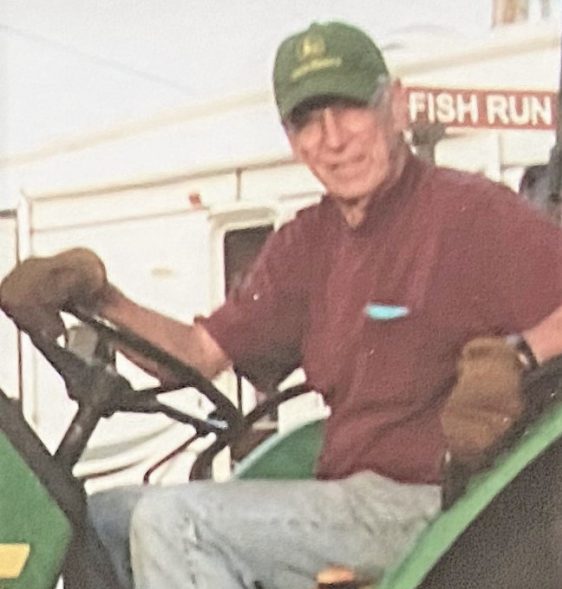 Ashton Dewalt Shoop, age 94, of Gloucester, died on Monday, July 4, 2022, at Riverside Walter Reed Hospital. Ash was born on Feb. 22, 1928 in Massachusetts to the late Ralph F. and Florence Cobb Shoop. Ash, a Northeastern University engineering grad, was very analytical and a Master Tinkerer. He was often sought out by family, friends, and neighbors alike for a consultation on how to fix things and he took great joy in sharing his talents and helping others. His favorite project was working on his beloved tractor, “Alice.” He spent every day working outdoors, whether it was chopping wood, fixing or building something or yard maintenance (often with invented projects requiring all kinds of toys and tools!). Ash kept his brain sharp with sudoku, crosswords, jigsaw puzzles and a constant stream of invented acronyms which was always a fun family game to decode; e.g., “R.O.N. for Remaining Over Night aka sleepover or “DNR” for Do Not Repeat. His sweet tooth was legendary and was best known for his affinity for homemade ice cream with real maple syrup. Ash retired as a Commander in the U.S. Navy Reserve after 20 years of service as a mechanical engineer, working primarily on aircraft. Following his military retirement, he enjoyed many professional years as a mechanical engineer, continuing his work with aircraft and, later, submarines. Although he was not active in later years, he maintained his Masonic affiliation in Massachusetts. Upon Ash’s final retirement from his civilian job, he and his beloved wife, Christie, traveled around the country for almost two years in search of the perfect place to settle in retirement life.

They found it in Gloucester. Ash was preceded in death by his parents and daughter, Kerry Ann Breed. Ash is survived by his wife of 68 years, Christie Ann Shoop; daughters, Kristin Q. Shoop and Kimberly J. Shoop; seven grandchildren, Ryan, Andy, Abby, Liam, Ashton, Logan, Levi, and a brother, Bill Shoop, survive him as well. A Celebration of Life service will be held at 11 a.m. on Saturday, July 23, 2022, in the chapel of Hogg Funeral Home, Gloucester Point.

Inurnment will be held at Arlington National Cemetery at a later date.