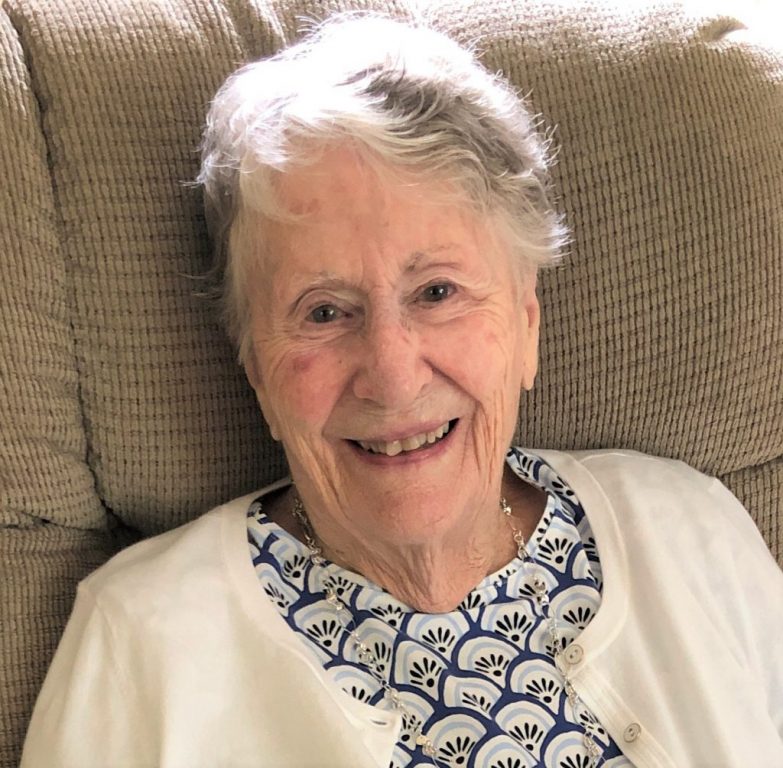 Ada Doreen Ungate, 97, died on Saturday, August 29, 2020 in Hallieford, Va., at the home of her daughter and son-in-law, with whom she had resided for the past eight years. She was born March 3, 1923 in Flushing, N.Y., to Honora Burke Hardy and Hubert Haydn Hardy. She grew up in Brooklyn, N.Y., and graduated from Bishop McDonnell High School in 1940. She attended Grace Institute for secretarial training and married Edward “Ted” Ungate in 1943. After the war they settled in Haddon Heights, N.J., where they started a family. In 1960, the family moved to Elmira, N.Y., when Ted joined the Corning Glass Works as a structural engineer. Doreen was active in her children’s schools and volunteered at the Arnot Ogden Hospital in the Medical Records Department, becoming a full-time employee in 1974 and working for 10 years before she and Ted retired to Long Beach, N.C., in 1984. They enjoyed 10 years in Long Beach before moving to Williamsburg, Va., in 1994 to be closer to family. In 2005, she moved to Gwynn’s Island in Mathews, Va., and then to Hallieford in 2012 to live with her daughter and son-in-law, Martha and Bill Hayes.

It was during her years living in New Jersey and raising her children, while Ted was working for an engineering firm in Philadelphia and attending night school at Drexel University, that Doreen taught herself how to sew, a passion which would continue throughout her life. Her proficiency with handwork included not only sewing, but knitting, crocheting, smocking, and embroidery, as well. She sewed everything from pajamas to school uniforms to prom dresses and eventually wedding gowns and bridesmaid dresses. In Elmira she spent many years sewing costumes for the theater productions at Notre Dame High School. In later years she sewed and smocked an incredible collection of dresses for her five granddaughters now worn by her two great-granddaughters. In Williamsburg, Doreen volunteered her sewing skills at Colonial Williamsburg in the Conservation Lab, repairing antique quilts and samplers. She also worked on the repair and restoration of George Washington’s Dining Tent. She was a member of the Embroiderers Guild of America. Doreen was a volunteer at the Williamsburg Community Hospital, a member of the Mathews Volunteer Rescue Squad Auxiliary, and the Mathews County Woman’s Club.

The family would like to extend their heartfelt gratitude to Karen Harvey and Vickie Hall for their loving care and devotion to our mother for the past six years. Final resting place will be at the New St. Mary’s Cemetery, Mt. Ephraim, N.J. Memorial contributions may be made to Riverside Walter Reed Hospice, 7358 Main Street, Gloucester, Va. 23061.
Faulkner Funeral Homes, Foster-Faulkner Chapel, Mathews, is assisting the family.