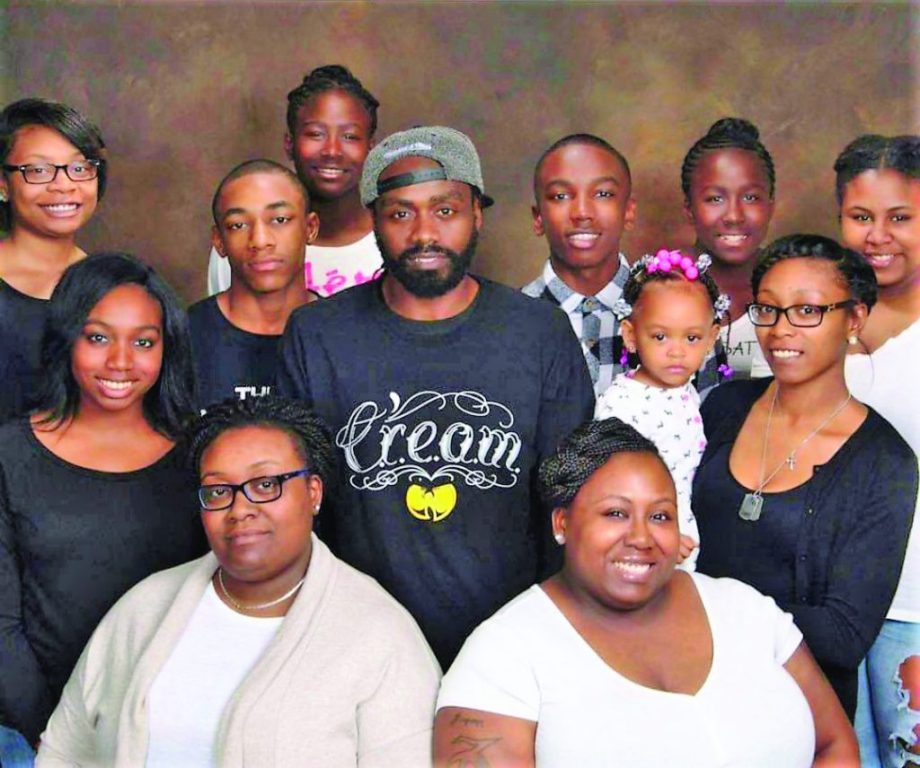 Alicia Marsh, seated left, is shown in happier times with next older sister Sondra. In the second row, from left, are her younger siblings Alana, J.T., and Jessica Marsh (Jessica is holding J.T.’s daughter Greigh); back row, Alicia’s daughter and son Kiara and Xander Cooke, and Sondra’s children Myasia Marsh, Allah Armistead, and Amari and Queen Marsh. Not pictured are Alicia’s parents Lyndall and Johnny Marsh and J.T.’s daughter Jameelah Marsh. Alicia was the first person in Gloucester to die of the coronavirus COVID-19 that is currently sweeping across the nation.

Alicia Marsh was the kind of person that everybody loved. Popular and friendly, with a heart for helping people, she was active in her church, supportive of her mom and dad, and the kind of sister that her four younger siblings knew they could depend on.

“Family was everything to her,” said her sister, Jessica Marsh of Newport News. “She was like the glue in our family. She was everybody’s go-to person … And she was very smart—super smart.”

A Gloucester resident, Alicia grew up in Mathews, where she graduated from high school in 1994 after having made a name for herself in sports such as basketball, softball and track.

Because the family depended on Alicia so much, it was tough on them when both she and her next-older sister Sondra were admitted to Riverside Walter Reed Hospital on April 4 with coughing and flu-like symptoms, and it was frightening when they were both diagnosed with the novel coronavirus, COVID-19. It was tougher still when their father, Johnny, entered the hospital with the disease the following day.

But it was a crushing blow to everyone when three days later, on Tuesday, April 7, with both Alicia and Sondra scheduled for discharge, the family got a call telling them that Alicia had died. Just three hours before, she had sent the family a text message telling them all that she would be home in a while.

Confusingly, while Alicia’s death was attributed to COVID-19, Jessica said that the official cause of death listed on her death certificate was “massive pulmonary embolism,” or a blood clot.

Jessica said that in the two weeks since Alicia’s death she had discovered by watching a news report on television that blood clots have been linked to quite a few COVID-19 cases. And the online edition of the journal “Science” supports this. An article dated April 17 by Meredith Wadman, et al, says that almost a third of 184 COVID-19 patients in a Dutch ICU had blood clots, while many patients have “‘dramatically’ high levels of D-dimer, a byproduct of blood clots.”

“The more we look, the more likely it becomes that blood clots are a major player in the disease severity and mortality from COVID-19,” said Behnood Bikdeli, a cardiovascular medicine fellow at Columbia University Medical Center, in the article.

Regardless of the diagnosis, Jessica said it has been very hard for the family to cope with their loss. That’s why she was thrilled when she discovered a video on Alicia’s phone that Alicia had recorded two days before her death.
In the video, Alicia said she could hardly believe she was where she was, and that it was difficult to be apart, but that everyone should cherish the times they had together. She said that God was good and had blessed her many times over.

“Even though I sit here in a hospital bed, on oxygen and weak, I’m not worried ’cause I know that God has done so many wonderful things for me and that I have a relationship with him,” said Alicia. “Either way, I’m heaven-bound, and I thank God for that.”

Jessica said that watching the video had given her family peace in spite of their loss, and that they felt like people should see it, so they shared it on Facebook.

“The most important part is having a relationship with God and trusting him and thanking him for everything,” said Jessica. “We see people passing away every day while we get to get up and drink a cup of coffee or see our spouse or go to work. We should thank God for that every single day.”

A viewing was held for Alicia on Saturday at J.K. Redmond Funeral Home in Shacklefords. She was interred with a graveside service on Sunday at Rising Valley Baptist Church at James Store.

The article about COVID-19 can be accessed online at www.sciencemag.org/news/2020/04/how-does-coronavirus-kill-clinicians-trace-ferocious-rampage-through-body-brain-toes.

The video that Alicia recorded had recorded two days before her death can be seen below.