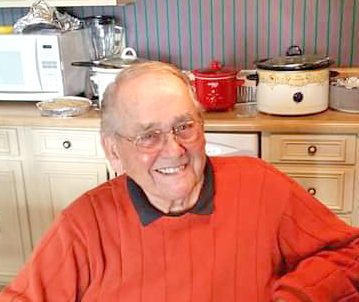 William D. Fary Sr. passed away on June 28, 2022, just a few days shy of his 93rd birthday. He was born on July 4, 1929 to Robert Emmett Fary and Frances Elizabeth Daniel Fary. He was born and raised in Gloucester County, Virginia, and never left. He graduated from Botetourt High School in 1947 and as a senior, he actually drove a school bus. Apparently with no brakes, according to his stories. And he was known as the “Big Sleep.”

Bill was raised as a farm boy and lumber worker and after growing up and getting married, he left the farm business in order to support an ever-growing family. He worked at American Oil (AMOCO) and in 1963, he formed a partnership with his father-in-law, Curtis Thomas, and they opened a Ford franchise under the name of Fary Thomas Ford, Inc.

Bill was involved with the Lions Club in his much younger years. And, according to his wife “Tommie” many years ago, was said to be a superior dancer. He and Tommie had their group of friends and quite often friends and all of their kids got together at each other’s homes. Sadly, most of their friends left this earth long before Bill and Tommie. As he became more successful, he became involved with local banks by working on their boards of directors or loan committees. He also picked up the game of golf and became quite adept and even in his later years when he could not hit as hard or far, he prided himself on at least being accurate.

But his most fun was on heavy equipment and he acquired several machines, i.e., excavators, backhoes, dump trucks, portable sawmill, etc. He loved getting on the machines and moving stuff around.

Until his recent fall resulting in a broken hip, Bill was still living independently, driving to the office each day and cutting his own grass.

He is survived by his children, Billye Dalton and husband Michael, Timmy Fary and wife Robin, Wanda Fary and Susan Finkel, and by his special “adopted” son, John Brown, who has been his right-hand man, confidant and most importantly friend, for almost five decades.

Graveside services will be held at 3 p.m. on Saturday, July 2 at Olive Branch Methodist Church at Harcum, Virginia, with visitation at Andrews Funeral Home on Friday, July 1, from 6-7 p.m.

In lieu of flowers, donations are welcome to the Olive Branch Cemetery Fund or to Gloucester Fire & Rescue.
Andrews Funeral Home, Gloucester, is in charge of arrangements.