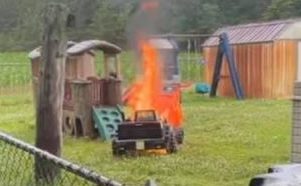 This toy dump truck burst into flames and burned to ashes in Gloucester last week.

A toy truck fire that occurred in Gloucester last Wednesday provides a cautionary tale for parents of small children.

Lieutenant Tony Villani, Fire Prevention Officer with Gloucester Volunteer Fire and Rescue Squad, responded to a call on June 9 for a toy dump truck on fire. When he and his crew arrived on Engine 45, the toy was blazing, and firefighters extinguished it with a water can, but all that was left were a few small pieces of metal and a black, smoldering spot in the grass where the toy had been.

Villani said the homeowner reported that the toy truck, which the family had recently purchased used, had quit working earlier that morning, and they left it outside. Later, they saw smoke and went outdoors to investigate, only to find the toy in flames. They said the truck was not plugged in to a charger. They moved it away from the house and filmed it as they waited for the fire department. It quickly became engulfed by flames.

“Imagine what would have happened if the toy...