The hummingbird that spent the winter 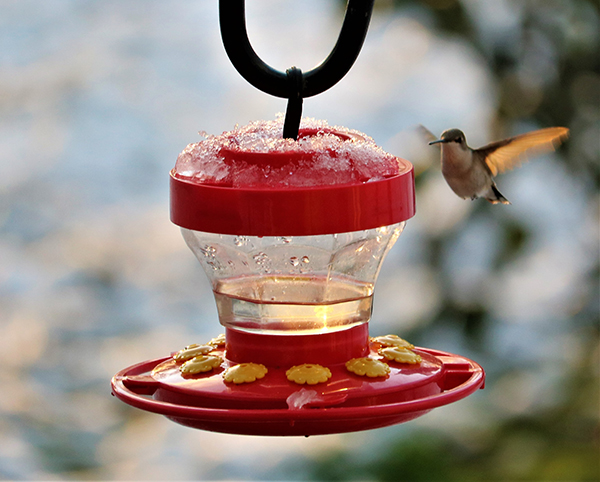 The Safrits’ hummingbird showed up early on Friday, Feb. 21, to have a breakfast of syrup from a snow-covered feeder. Photo by Tenna Safrit

Hummingbird lovers set their seasonal clocks by the tiny birds, which arrive from Southern climes in April and depart in September.

Tenna Safrit of Gwynn’s Island is one such lover, who said her family averages six hummingbirds at the feeder all summer. More come during migration. “Around the first week in September, we have four more stop on their way south,” she said.

All the birds stayed a week or two, she said, and “by mid-September they started leaving.”

At that point, her husband Steve wanted to take the feeders down.

“I told him I had read to leave the feeders up for at least two weeks after you see the last hummingbird for any late stragglers that are passing through and this is when she showed up,” said Tenna, speaking of the hummingbird that astonished the Safrits by staying for months and eventually right through the winter.

“We figured she was a straggler and would be gone in a few days but she never left,” Tenna said. “I wanted Steve to put lights on or near the feede...