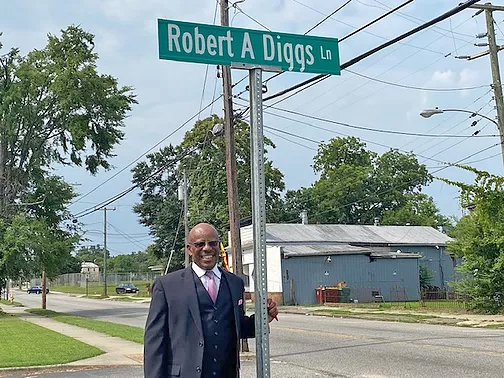 TABERNACLE BAPTIST CHURCH PHOTO The Rev. Dr. Robert A. Diggs Sr. with the Petersburg street sign that honors his work in the city.

Mathews County native the Rev. Dr. Robert A. Diggs Sr., pastor for 25 years at Tabernacle Baptist Church in Petersburg, has been honored by the naming of a street for him.

Petersburg City Council in June approved the renaming of Poplar Lane, and the Rev. Dr. Diggs unveiled the new street sign on Sunday for Robert A. Diggs Lane near the church.

Diggs said the street runs between a senior apartment complex and 30,000-square-foot community center which he was instrumental in constructing on the church campus.

A resolution adopted June 15 by Petersburg City Council resolved that the street renaming honors the pastor for having “served the community for all of his life.”

Diggs graduated in 1970 from Mathews High School, then attended Norfolk State University where he was recruited to run track, having received the state half-mile crown while at MHS. After NSU, he entered the U.S. Army, receiving a master’s degree and teaching physical education and coaching track for three year...