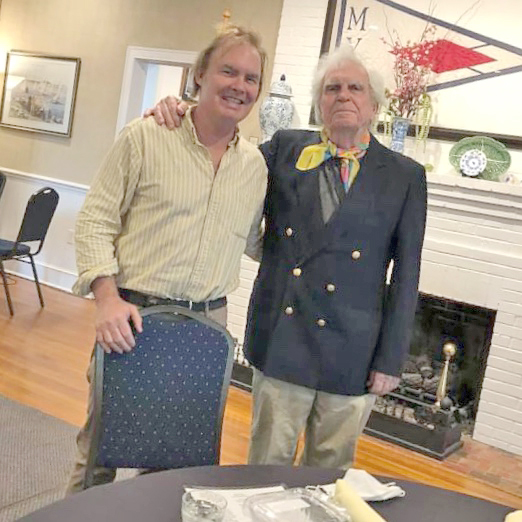 Ladies, you’ve missed your chance. Sam Forrest sailed away quietly on May 5, 2021 after a sudden hurricane of ill health. His final, but long-term, wish was “to have just one more romance.” Alas, that was not to be.

Samuel Shores Forrest, like his bold, finely crafted furniture, was one of a kind.

Born in Mathews, Va., on Jan. 20, 1936, in the depths of the Great Depression, to Lovie Corrine Clinard and Dennis Dryden Forrest, he was steeped in a tradition of individuality and self-sufficiency. After high school in Mathews, Sam joined the U.S. Navy, then attended Richmond Professional Institute (RPI), the forerunner to Virginia Commonwealth University (VCU). Now, a leading public arts university, its identity was cemented in the 1950s and ’60s, when Sam was an integral part of it. He majored in Social Work, served as a parole officer, then returned to study art, where he developed his obsession with furniture design.

The rest of his life was driven by a Promethean instinct to explore.

Sam’s life was a high-wire act, whether surviving on a farm without electricity, in a cargo container at his “Buddha Ranch,” on a kibbutz in Israel, or in a car that served as a motel room for months while searching for a particular boat.

Upon finding that boat, a 28-footer, handcrafted by a local high school student, Sam single-handedly sailed across the Atlantic, missing his French destination and re-routing himself through the Mediterranean to Malta, Tunis, Crete, Greece and Egypt. Rather than lose money by selling his boat at the end of the trip, Sam sailed back across the Atlantic, nearly losing his life off the coast of North Carolina.

A gourmand of adventurous living, Sam then set his sights on a new frontier; the mountains. At age 50, he loaded up an old Volkswagen camper and headed for Oregon.

Despite his itinerant ways, Sam remained deeply attached to Mathews and to Richmond.

He was a part of the Richmond art scene since the 1960s, when he formed friendships with artists Rubin Peacock, William Fletcher Jones, Bill Kendrick, Bill Among and writer Tom Robbins, who found emotional succor and good beer at the legendary Village Café.

In 1987, Sam moved to the Carver community in Richmond. Unhappy with Richmond politics, he ran for City Council in 1990. Despite losing the election, he continued to fight for his beliefs, attending Council meetings, emailing his dissatisfactions to City Hall, and, on occasion, complimenting their decisions. A number of his letters to the Richmond Times-Dispatch earned him “Correspondent of the Day.”

In the almost 30 years that he lived in the Carver community he kept an open door for lively conversation on issues of the day. While many disagreed with his political or philosophical views, all delighted in his stories of adventure and his handcrafted furniture. Neighbor and longime friend Zarina Falzaldin recalls that in addition to civic leadership, “Sam loved music and was a beautiful dancer.” As a member of the Mathews Yacht Club, Sam was always on the dance floor with any and all ladies who could keep up with him.

Of Sam’s bold style of woodworking, Rubin Peacock noted, “His work is not mere craftsmanship, it has emotional power and communicates the universal. It stands alone and is unique in any visual language.”

For artist Catherine Venable: “His furniture, like him, is taken from nature, shaped with incredible precision, sanded to perfection, and then dressed with a pleasing sheen. He struggled to make himself a better man, aspiring to Buddha.”

While striving toward a state of Buddhahood, Sam also made many a sacrifice to Bacchus. He was a likely guest at any good party. “He was a master of passion in three dimensions,” according to Ryland Fleet. “A steady and loyal friend. A charming rascal.”

Those who watched Sam merge into the horizon of this life, were struck by his astonishing vitality. Safe travels, old friend. And “thank you, kindly.”

A celebration of life service will be held from 1-4 p.m. Saturday, May 15, at his home, “Haiku,” Mathews. Everyone is asked to bring finger foods.