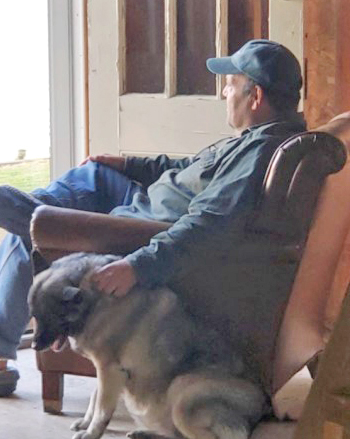 Robert Lee Whitson, 57, of Churchville, Virginia, went to be with his heavenly Father on Friday, Feb. 26, 2021. He was surrounded by love.

Robert was born on April 11, 1963 in Washington, D.C. He was the only child born to his loving parents, Bobby and Gaye Whitson. Robert was an auctioneer, entrepreneur, farmer, chef and mentor with many additional passions along his life’s journey. He was known to be an old soul, man of God and modern-day renaissance man who loved life and believed his greatest achievement to be his family.

Robert’s love for the outdoors began as a child as he spent a vast amount of time with his grandparents in both West Virginia and Deerfield, Virginia. He spoke the language of nature, and had a gift for the cultivation of agriculture which included animals of many kinds. Robert utilized these gifts every day, and shared his knowledge with friends and family any chance he could. Perhaps his favorite place at the time of his passing was his house on the Chesapeake Bay where he felt at peace. Here he enjoyed fishing, crabbing and watching the beauty of the bay from his worn leather chair.

Robert was a true lover of God’s word and is remembered as one who would often sing hymns aloud. In the words of one of his most beloved hymns, he is now exchanging the old rugged cross for a crown in the Glory of God’s presence.
Robert had a personality as bold as the mountains of the Shenandoah Valley and a love that ran as deep as the salty seas. He had an uncanny ability to imprint knowledge and accountability on anyone who crossed his path. Robert had a sophisticated mind that would relentlessly challenge life and encourage others around him to do the same. Though overwhelming to some, he expected his friends and family to reach their greatest potential. He was a believer in following truth and finding purpose without contingency which he believed would ensure success in all aspects of life. Robert pioneered a path of his own, and made no excuses along the way. His footsteps serve as a roadmap for friends and family he left behind. May we all remember the light he brought to our lives and continue our earthly journey remembering the lessons he taught.

As spoken by one of his favorite musicians, Frank Sinatra, “I’ve lived a life that’s full. I’ve traveled each and every highway and more, much more. I did it, I did it my way.”

(Due to the COVID-19 pandemic all current guidelines and restrictions will be followed.)

Memorial contributions may be made to the Wounded Warrior Project, P.O. Box 758516, Topeka, Kansas 66675 or St. Jude Children’s Research Hospital, 501 St. Jude Place, Memphis, Tennessee 38105. At the family’s suggestion, a tree may also be purchased to be planted in Robert’s memory, on his obituary page on the Coffman Funeral Home website.

Coffman Funeral Home and Crematory, 230 Frontier Drive, Staunton, Va., is in charge of his arrangements.

Condolences may be expressed to the family online at www.coffmanfuneralhome.net.