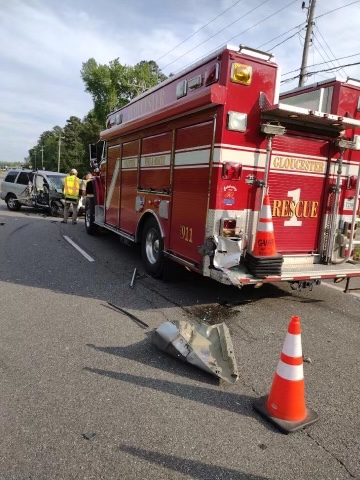 GVFR PHOTO A Gloucester Volunteer Fire and Rescue vehicle was struck and damaged Sunday afternoon while working at the scene of an accident.

A Gloucester Volunteer Fire and Rescue vehicle was struck by a passing motorist on Sunday afternoon while crews were working on the scene of a motor vehicle crash on Route 17, according to GVFR Fire Prevention Officer Tony Villani.

Shortly before 6 p.m., GVFR, the Gloucester County Sheriff’s Office and Virginia State Police were at the scene of the crash in the 8500 block of George Washington Memorial Highway.

All emergency vehicles on scene had their emergency lights activated and southbound traffic was being funneled from the right lane to the passing lane, Villani said. Gloucester’s rescue truck was blocking traffic in the right lane, and the deputy’s vehicle was parked in front of the rescue truck.

The deputy had just entered his vehicle to leave the scene when a vehicle allegedly attempting to pass the scene ran into the rear of the rescue truck, completely spun around the truck and hit the deputy’s vehicle, coming to rest facing north in the southbound lanes. The vehicl...