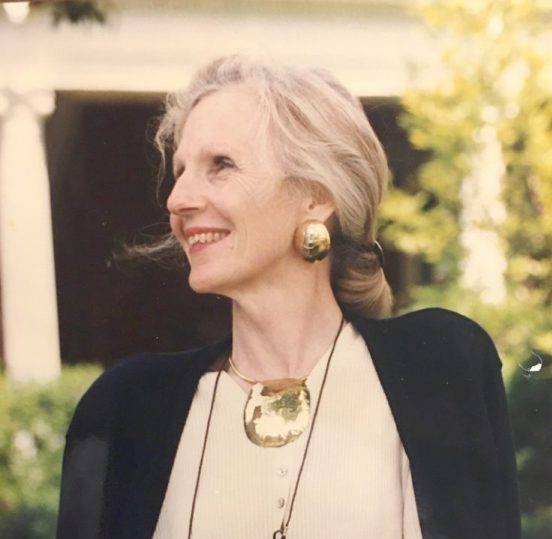 Reba Robinson McVey died Aug. 16, 2021 in Williamsburg, Virginia, just 18 days after the death of her husband, Hal, surrounded by her children who loved her dearly. She was 79.

Born in McDowell County, West Virginia, Reba was raised in and around Baltimore, Md., older sister to two rambunctious brothers. Reba Jean, as she was known then, was petite, blond and blue-eyed, bright and sensitive, the artist of the family, and a pretty good ice skater and dancer. Most of all, she loved to sing and was blessed with a pure soprano that would sustain her throughout her life and delight anyone lucky enough to hear her sing. Encouraged by her parents, Reba developed her vocal talent through her teenage years and once sang live on local television. After graduating in the Class of ’59 from Eastern High School in Timonium, Md., she entered the famed Peabody Conservatory in downtown Baltimore. There she received classical voice instruction, played Zerlina in Mozart’s Don Giovanni to much acclaim, and learned to interpret the lieder of Brahms and Strauss.

Shortly after graduating from Peabody, Reba met Hal McVey, a Virginian and a Hampden-Sydney man, the roommate of her own roommate’s boyfriend. Bound by a shared love of music and a curiosity about the world, after a brief long-distance courtship that included concerts and day sailing off Gloucester Point, Reba and Hal were married at St. Thomas Episcopal Church in Garrison, Maryland, on Dec. 12, 1964.

They settled on Granby Street in Richmond’s Fan District, and so began the great adventure, a 56-year partnership with Hal, of old houses and loyal friends, local volunteerism and world travel, much laughter, some tears, and three children whom Reba loved with everything she had. And music, always music.

For many years, Reba sang with Hal in the choir at Richmond’s Second Presbyterian Church, often as a featured soloist. Her children recall both parents learning their parts throughout the week, filling the house with their voices, particularly Reba, who practiced at the piano in the front living room. Reba played the piano with her children at her side, patiently singing “I’ve Been Working on the Railroad” and other children’s classics over and over again to their great delight.

She coached young vocal talent at the same piano, with an emphasis on technique and breath control. In the ’70s she wore headscarves and formed a madrigal group with a troupe of like-minded musicians. She and Hal were active patrons of the Richmond Symphony and together were founding members of the Hampden-Sydney Music Festival, which brought the very best chamber music performers in the world to Virginia in the summertime.

Reba’s ear for music was rivaled by a keen eye for interior design. She and Hal filled their homes with antiques and well-curated Persian rugs, mixing them with unexpected modern art on the walls. Both 1808 Hanover and 2324 Monument homes were featured in the Fan Christmas House Tour. The latter was also open to the public during the Garden Club of Virginia’s Historic Garden Week. For a time, Reba made a profession of this passion, opening with her business partner a Carytown storefront called Distinctive Consignments. The river house on Gloucester’s Ware Neck, where they moved after Hal’s retirement, was called Baiae and lovingly restored through the years. Typically, gracious and welcoming, though in a less formal way, it was the perfect gathering place for children and grandchildren and dogs to run free.

For a number of years in the ’80s Reba served as regional placement director for the American Field Service, a student exchange program. The guest room on Monument was often home away from home for additional children both foreign and domestic. Reba doted on them all as if they were her own, and she helped shape many lives through her generosity and empathy.

In their final years together, Reba and Hal moved to Williamsburg Landing, where Hal entered Memory Care and Reba bravely built a new life for herself, full of books and new friends. And music, always music, as she attended many concerts in the area, sang showtunes, standards and hymns for patients in Memory Care and hospice, and founded a music therapy program for patients called Music in Motion.

Reba was preceded in death by her parents, Therman Lewis Robinson and Muriel Robinson Schoelkopf, and her two brothers, James Douglas Robinson and Richard Melvin Robinson. She is survived by her daughter, Margaret McVey Singleton (John); her sons, Lewis Lawson McVey (Deborah) and Ian Douglas McVey (Theile), and her five grandchildren, Robert, Henry, Molly, James and Callum, all of whom she would call to sing “Happy Birthday” each year, all of whom will, each in their own way, miss her beautiful voice.

A special thank you to Amy Fradenburgh of Gloucester, who has been the best of friends to Reba and Hal; to Nancy Harvey, a dear friend made late in life, and to much-beloved cousin Elizabeth Wallace for her enduring support for the entire family.

A memorial service will be held at a later date.

In lieu of flowers, the family suggests donations in Reba’s memory be made to the Alzheimer’s Association or the Conservatory General Scholarship Fund at the Peabody Institute.