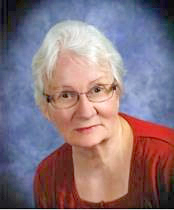 She was born in Boston, as anyone who had a conversation with her could tell from her accent. Her childhood was complicated and she moved frequently. Because it was so hard for her to find roots and a real family life, her life’s wish was to have a big family of her own and she accomplished that.

Though she hadn’t been out of New England before, she married an Airman and began a life of travel, both domestic and overseas. She herded her family all across Spain and Germany. In the U.S. she set up households in Massachusetts, California, Florida, and Texas. She made it look easy, though now looking back, we can see that it didn’t come easy. There were many struggles. In 1981 she moved to Gloucester, Va., from Watertown, Mass., and her lifetime of moving ended. She felt that she finally was home.

She is remembered as a good Christian woman, strong in her faith. She was generous and kind. She was also adventurous and had a good sense of humor with a sharp wit.

She was preceded in death by her husband, Perly Arthur; brother, Albert Callahan, and son, James Long. She leaves behind daughters, Jeanne Smith and Michelle Greeley; sons, Dennis and David Long and Michael McNish; many grandchildren; great-grandchildren, numerous friends, acquaintances, and her Reedswood Christian Church family.

Expressions of sympathy can be made to the Gloucester-Mathews Humane Society that she supported and who provided her with so many furry companions over the years. A celebration of life will take place at a later date.