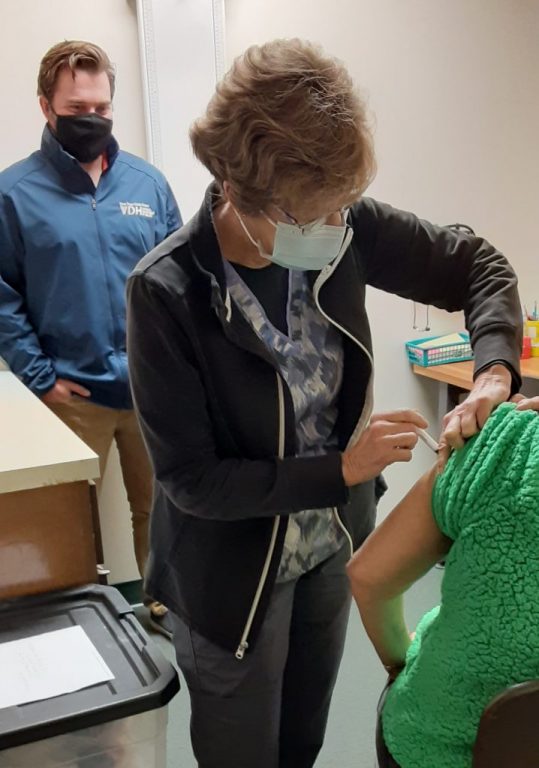 The Three Rivers Health District is gearing up to handle the possible impact from the omicron variant of the COVID-19 virus. Omicron has become the dominant variant in the U.S. in just three weeks, and is doubling every two to three days, according to the district’s director, Dr. Richard Williams. Shown here is Jody Emerson, RN, PHN, administering the vaccine to a patient as the district’s chief operating officer Brenden Rivenbark observes.

The omicron variant of COVID-19 is in Virginia in large numbers, and it’s spreading rapidly.

Since it was first identified in the U.S. on Dec. 1, omicron has become the dominant strain of COVID-19 in the U.S., said Dr. Richard Williams, medical director of the Three Rivers Health District. It’s the cause of 73 percent of the new cases arising nationwide, he said, and it’s proving to be as contagious as the measles, which “is more infectious than anything we’ve ever seen.”

Williams said he and his staff are quickly gearing up to handle the impact the virus could have on local residents in the coming weeks.

“It’s moving so fast, it’s ahead of everyone,” he said. “It’s doubling every two to three days … It’s really shocking how fast this thing has exerted its dominance.”

Reports that the omicron variant is not as virulent as other forms of COVID-19 are premature, said Williams, because South Africa, where the variant was first identified in November, is a very different place...