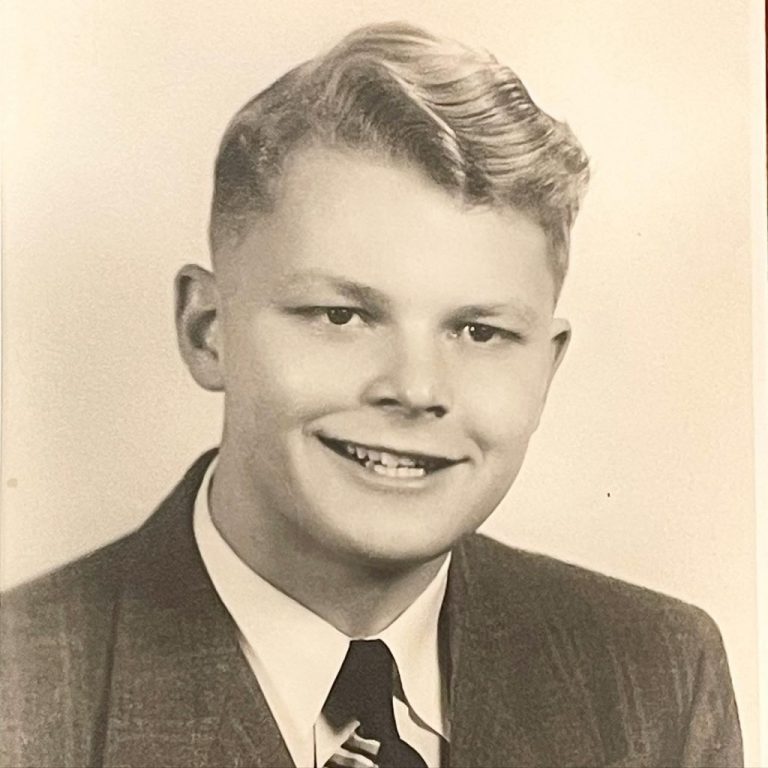 Neil Andrew Holmberg died on Aug. 3, 2021 at age 89. He was one of the first aerospace engineers hired by NASA soon after its inception and throughout the span of his 39-year career worked on some of the iconic scientific space projects of the Cold War. These included all five missions of the Lunar Orbiter Program, which mapped the moon to determine the landing site for the Apollo astronauts, and the Viking missions to Mars. He worked on fuzzy logic, magnetic suspension superconductivity, the SCOUT solid propellant launch vehicle, the Orbiting Geophysical Observatory to study Earth’s magnetosphere, Vertical Short Take Off and Landing (V/STOL) aircraft, and the National Transonic Facility (NTF) cryogenic wind tunnel. He won an Exceptional Service Medal from NASA for his work on the Viking Flight Team. As a project team member for the Lunar Orbiter Program, he received a framed copy of the historic first photo of Earth from deep space, taken by the Lunar Orbiter 1 in 1966. This image was on the wall of his hospital room when he died.

The Viking lander and a lunar orbiter that he worked on are both on display in the Smithsonian National Air & Space Museum. Additionally, he has another contribution to that museum in that the robotic arm that received a signal from the Viking while in space to cut the ribbon at its inauguration flew with him in 1976 on a flight from JPL in Pasadena, Cal., to Washington, D.C. As the robot needed a name for its ticket, he named it Oscar Holmberg after his grandfather (Oscar Skog). In that sense, they both joined Chief Justice Warren Burger, Vice President Nelson Rockefeller, and President Gerald Ford in the museum’s opening ceremony. Neil’s very first NASA project was the Nuclear Emulsion Recovery Vehicle (NERV), which measured the radiation in the Van Allen belt left by experimental nuclear bomb detonations in it by the U.S. military. He was responsible for both the NERV rocket design and the recovery of the data from where it fell off the coast of Peru with shark repellent as a precaution for data loss. His final space project was the Halogen Occultation Experiment (HALOE) payload, which examined the gases of the ozone hole. His final project before retiring was not focused on space but on the energy efficiency at the NASA Langley facility, particularly the energy intensive wind tunnels, and how it could be more sustainable. He noted over the decades that he lived on the Chesapeake Bay the transformations of its ecology and biodiversity.

Neil was born in Seattle, Washington, as a first generation American to Andrew Holmberg and Emma Hansen Holmberg. His father, whose formal education ended after the fourth grade, was a fireman. Like Neil, he loved the outdoors and the family volunteered their house as a rope station for mountain climbers who were ascending Mt. Rainier. His father’s leg was amputated on Neil’s seventh birthday, after which he raised flowers and Neil and his older sister, Jean, sold them door-to-door from a wagon for income. Neil was given the gift of a dog named Happy that Christmas, whose ability to pick and eat ripe cherries gave Neil great joy. He was, lifelong, a magnet for dogs of all kinds and he seemed to have an uncanny ability to communicate with them.

Neil was drawn to science and engineering but a college education was financially unattainable for the family. Following high school, he worked in a mailroom full-time to pay for night classes. During a weekend trip on Mt. St. Helens with the Mountaineers club, Neil and the others reached their cabin to find it snowed under and the weather too dangerous for skiing. They dug into the snow to enter the house and remained there for two days during the storm. During conversations that weekend, engineering students who attended college through the GI bill convinced him that he would never graduate if he continued taking only two classes at a time. He took placement exams the next week and was offered a slot at the University of Washington in electrical engineering. To support himself, he worked summers for the Army Corps of Engineers in Anchorage, Alaska, for several years and then for the FAA, installing navigational aids for airplanes. He hiked regularly in Alaska, particularly admiring the wild raspberries and the bears he encountered while doing so.

In 1957, while doing graduate work at UCLA through a fellowship with Hughes Aircraft, Neil drove overnight from Los Angeles with friends to Yosemite for a Labor Day weekend rock-climbing expedition. Just before sunrise, they unexpectedly witnessed a nuclear bomb test in the Nevada desert that lit up the sky in a way that felt strange and portentous to him. The next day, he met Beverly Grant from Los Angeles, who was part of a Sierra Club hiking trip. They were married for 63 years and lived in Mathews County, Virginia, for over 50 of those years. They raised four children (Craig, Heidi, Karen, and Eric) on a waterfront farm that focused primarily on dairy goats and oysters but also included sheep, steer, horses, geese, rabbits, ducks, and chickens. For many years, they also grew their own fruits and vegetables and lived as self-sufficiently as they could. Neil had eight grandchildren that he treasured; of those, he was preceded in death by Scott Holmberg.

Neil embodied a life philosophy that was deeply egalitarian and that prized humbleness and the environment. Though he had interest in it, his work ethic and career demands prevented him from international travel, barring his time as a graduate student and Sloane Fellow at MIT when the members of the program travelled throughout Europe and met dignitaries and industry leaders. He told the stories of that three-week trip with joy for the rest of his life. He expressed a regret in later life that he did not stop to smell the flowers more than he did. In lieu of flowers or donations, in his honor, please take the time to pet a dog or smell a flower. His service was held on Aug. 6 at Kingston Parish (Christ Church) in Mathews, where he served for many years as treasurer.