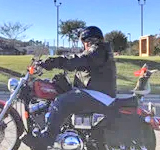 Michael Scott Conner was called home Monday, July 4, 2022. He passed peacefully in his home in Gloucester after 53 years of taking on the world. Michael was born Dec. 8, 1968 to David and Sandra Conner. He and his older siblings, Dougie and Sherri, spent their earlier years in Hampton, Va. The rest of his time was spent in Gloucester, where he stayed close to his family and friends. He worked at Unidyne with his dad and brother, then later went on to do auto mechanic work out of his own shop. Most notably, Michael spent a lot of his young adulthood racing and working on his race car in the garage with his dad. Anyone who knew him knew about his love for cars—both working on them and driving them, oftentimes too fast. From tracks in South Boston to Myrtle Beach, Michael got to fulfill his need for speed and was surrounded by his loved ones at every race. He had dreams of owning his own motorcycle which became a reality in more recent years. He quickly developed a true passion for riding. When Mike wasn’t in his Mustang, he was on his Harley just “cruising.” Michael was the baby of the family and was extremely loved and cared for by everyone around him. He was funny, charming, and the life of the party wherever he went. He was always laughing and making sure that everyone around him was having a great time. He cared greatly for his family and anyone who crossed his path. He and Jenn Ruschel eventually welcomed their own baby and Mike’s only child, Jessica Leigh Conner, to the world. He was also a loving uncle to his niece, Ceejay, and nephew, David. Through all of the ups and downs of life, Michael and Jessi used their strikingly similar humor and quick-witted attitudes to make light of and persevere through every situation, together. Michael was preceded in death by his parents, David and Sandra; his big sister, Sherri, and brother, Dougie, as well as his love of over 10 years, Sabrina. His fun and charismatic spirit lives on through his daughter, Jessica; grandson, David Oliver, and son-in-law, Daniel Rutherford. His family on earth will miss him dearly but are comforted to know that he is, once again, with the others who left us too soon. The family received friends on Monday, July 11, 2022, from 6-7:30 p.m. at Hogg Funeral Home. A graveside service will be held at Parklawn Memorial Park Cemetery, Hampton, on Friday, July 15, 2022 at 11 a.m.