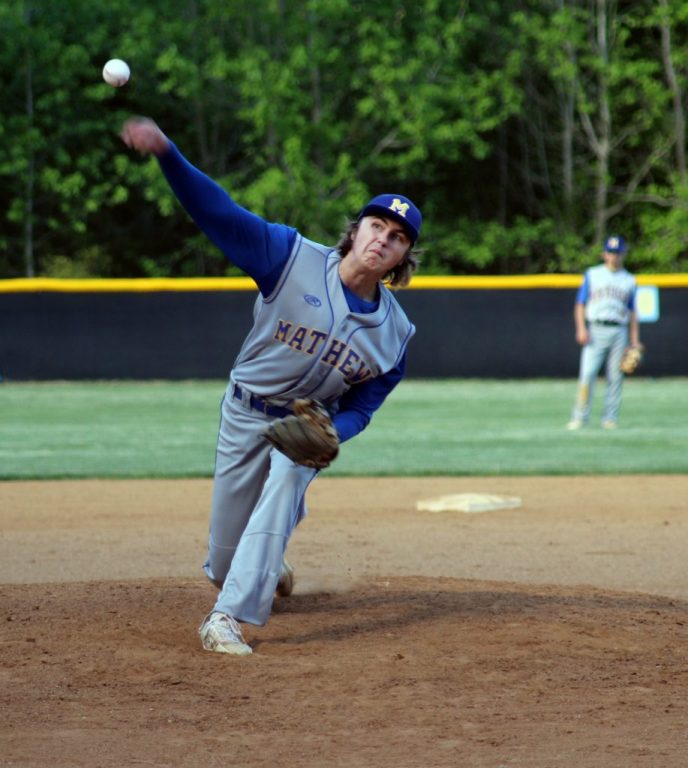 Blue Devil Daniel Moughon pitched a complete game Tuesday to get the win in Tuesday’s 6-2 victory over the visiting Middlesex Chargers.

The Mathews High School baseball team went 2-1 in recent action, picking up wins over Christchurch and Middlesex while falling to West Point.

Last Wednesday, Mathews defeated the CCS Seahorses by a 6-4 margin in nine innings. Will Jackson was the winning pitcher and Dawson Adams got the save.

The game ended with Aidan West hitting Richie Hogge on a relay to home plate. Brady Wright tagged out the runner on a bang-bang play at the plate to end the game. Hogge went 3-for-4 in the game and scored two runs.

Thursday’s game at West Point was a 2-1 loss. In spite of the loss, Timmy Dehoux pitched a great game, giving up four hits and getting 10 strikeouts. The West Point pitcher held Mathews to three hits and struck out 12.

On Tuesday, the Blue Devils hosted the Middlesex Chargers, with Mathews winning, 6-2. Daniel Moughon pitched all seven innings to record the win.

The MHS baseball team will host the King William Cavaliers at 5 o’clock today.
...