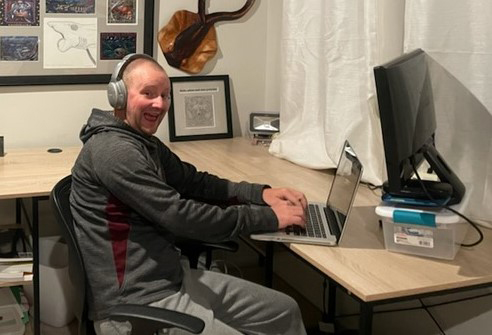 Mathews native Lucas Bohn, a professional comedian who now lives in the northern tip of Loudoun County Virginia community of Lovettsville, has started a new comedy record label business, along with his brother-in-law, Steven Jones of Virginia Beach.

Bohn said the business, BOJO Entertainment, involves recording live comedy sketches, editing them, and turning them into CD tracks. They’re then submitted to various streaming services for viewing. Eventually, a track could end up being viewed anyplace in the world.

Most of the tracks are uploaded to Laugh USA, a Sirius XM channel that’s considered the “clean comedy channel,” said Bohn. Because there aren’t a lot of comedians on that channel, the ones who are on there get played more and make more money, he said.

The channel keeps listeners tuned in by running shows recorded by big-name comedians such as Jerry Seinfeld and “filling in other acts with people like me,” said Bohn. He said Coach Tom Holaday of Mathews gets played a lot there, “the next one after me.”

Thus far, Bohn has produced CDs for eight or nine artists, any of which could be listened to 2,000 to 10,000 to half a million times across multiple streaming services. While the business isn’t lucrative yet, he said, it’s paying its own way, plus it gives him “chump change” to allow him to do “some fun stuff.”

A highlight for the small business is a collaboration with Jimmy “JJ” Walker, a comedian who made a name for himself as the star of the hit 1970s comedy television series “Good Times.” While BOJO is producing the comedy show, the company won’t be recording his album.

Bohn said he’s enjoying this new venture for a variety of reasons, not least of which is that it fills a need for comedians. “This gives comics something they can sell,” he said. “A professionally-mastered digital comedy show.”

Every little opportunity a comedian has to sell himself is important, said Bohn, because the one thing all comedians have in common is failure.

“The cool thing is that everybody starts off terrible,” he said. “Either they like you or they don’t. Every single time you perform, you’re opening yourself up for failure, not success. If you’re at the top, you’ve had more failures than anybody else.”

Bohn said when he started his career, he was helped along by other comedians. The comedy circuit is tough, he said, and every comedian has bad days, so having a friendly hand up is important. He said he loves what he’s doing, especially his new record label.

“It’s fun because I’m helping my friends,” said Bohn. “I like helping people.”