Mason steps down from Mathews School Board 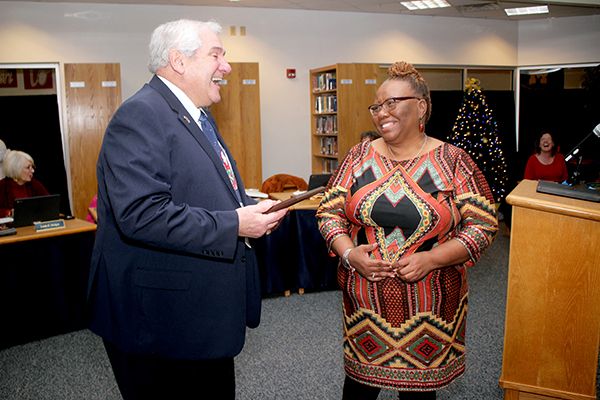 Mathews County School Board vice chairman John Priest presents a plaque to Melissa Mason thanking her for her tenure on the school board. Mason officially began her four-year term on the Mathews County Board of Supervisors this week. Photo by Charlie Koenig

Melissa Mason bid farewell to her colleagues on the Mathews County School Board during the board’s Dec. 17 meeting, as she prepares for her new role as a county supervisor.

Mason, the board’s current chairman, was appointed to the school board in February 2017 to fill the unexpired term of Jen Little, who had moved out of the area. That November, she was elected to the remaining two years on the seat.

This November, Mason won election to the Mathews County Board of Supervisors and will begin her four-year term on that board on Jan. 1.

During the Dec. 17 meeting, Mason thanked her fellow board members for the support and friendship they have shown to her. “These three years have gone by so quickly,” she said. “I am thankful for each one of you,” she continued, asking that the school board members give the same support, advice and direction to Desmond Smith, who was elected to fill the vacancy left by Mason.

Board vice chairman John Priest presented a plaque to Mason, thanking her fo...