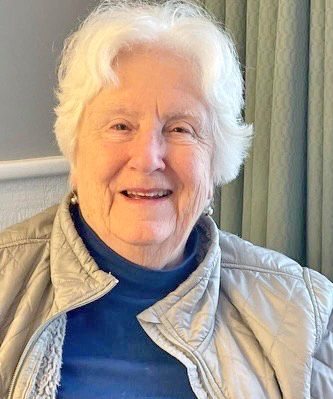 Margaret Jones Perritt, 85, died on Monday, Nov. 7, 2022, at Mid Coast Hospital in Brunswick, Maine. She passed peacefully with family and friends by her side.

Margaret was preceded in death by her parents, William and Alice Jones, and her husband and love of her life, Donald R. Perritt. She is survived by her brother, Meredith Jones and wife Judy of Mechanicsville, Va.; her sons, William Perritt and wife Kimberly of Dolores, Colo., and Christian Perritt and wife Melissa and sons, Billy and Henry of Harrisonburg, Va.; her granddaughter, Anna Perritt and husband Alex Scher-bing and stepson, Ethan of Richmond, Va., and her corgi, Nigel Molesworth. Margaret—also known as “Doodle”—did not have “friends,” she had family. So, the full family she is survived by is too extensive to list here.

Margaret was born in Richmond on Nov. 1, 1937 to Bill and Alice Jones. She and Donnie married in 1961 and would split their time living in Richmond, and Gloucester, Va., in the summers. Margaret led a dynamic life, serving as a gifted artist and art teacher, the Assistant Dean of Women at Richmond Professional Institute, and especially a loving mother, wife, and community activist. Margaret and Donnie moved to Gloucester permanently, but, after Donnie died in 2000, Margaret decided to move to Boothbay Harbor, Maine, influenced by her desire to start a new chapter in life and by her fond childhood memories of visiting Maine.

The impact Margaret had on her beloved communities of Gloucester and Maine is vast. Margaret strove to better her hometowns through the preservation of history, fighting harmful development, and the expansion of the arts. In Gloucester, she carried organizations such as the Rosewell Foundation and the Courthouse Players (just to name a few) to great success; and in Boothbay Harbor, she was a key founder of the Community Center, as well as a dedicated patron and volunteer at the Opera House and many other organizations.

Writing an obituary for Doodle is daunting, as it’s inevitable that some impact she had on a community or friend’s life will be omitted. Suffice it to say that, if you’re reading this, there is probably a hole left in your heart by her passing.

There was a celebration of life for Doodle in Boothbay Harbor on Nov. 14, and there will be a funeral service at Ware Church in Gloucester, in the spring. Details will be announced at a later date. Memorial gifts may be made to the Courthouse Players (courthouseplayers.org), Ware Church (warechurch.org), or the Rosewell Foundation (rosewell.org).