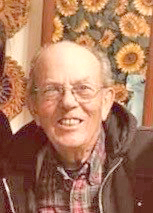 Larry Wildasin, age 82, of Gloucester, went to be with the Lord on August 3, 2020. He enjoyed spending time with his friends at Hardee’s, and they often encouraged him through his long battle with cancer. He was a hard-working man that was constantly busy taking care of his family and friends. Larry retired from the U.S. Army and Navy Civil Service, as an aircraft technician and mechanic, having served his country for over four decades including two tours in Vietnam. He was preceded in death by his parents, Arthur and Anna Wildasin of Hanover, Pennsylvania.

He is survived by his wife of 60 years, Janet Wildasin; two children, Larry Jr. and Michele, and one sister, Nancy Florian of Townsend, Delaware. He is also survived by five grandchildren, Stephanie, Amy, Jason, Amanda, and Kimberly, and great-grandchildren, Kylee, Gabby, Ashton, Waylon, Max, Easton, and two on the way. A special thank you for all the kind gestures from all our family, friends and neighbors during this difficult time. There will be a memorial at Petsworth Baptist Church on Friday, the 14th of August at 6 p.m. In lieu of flowers, please donate to the Wounded Warrior Project, P.O. Box 758516, Topeka Kansas 66675-8516.