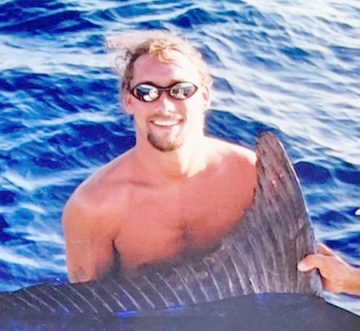 John Patrick Carleton was born on Oct. 15, 1968, in Newport News, Virginia, to Bonita Rae (Power) and Paul Andrew Carleton. John left us on Feb. 2, 2022, after succumbing to complications from long-standing health issues.

He provided so much love to everyone who truly knew him. His always curious and mischievous nature led him to many adventures that he shared with friends that were made along his journey through this life–working in remote villages in Alaska as a project manager on several village health clinics, to deck work on fishing boats in the Beaufort Sea or running his own very successful drywall/painting business, Carleton’s Custom Painting, for many years on Kodiak Island and Gloucester, Virginia.

John grew up in the small Gloucester County community of Coke. He once broke his leg when he was six and required new casts to be applied several times from dragging his leg across the carpets while he was healing. The broken leg kept him out of most of the first grade at Abingdon Elementary and he managed to maintain his work and move to the next grade with his class.

John visited Alaska in the mid-’80s and returned in 1990 to live. He quickly established himself as a hard worker and was soon running his own drywall and painting business. He was never far from the tools and would often be working with his crews to knock out a project and make a deadline. He was a generous boss who made sure that his crew had the best food while at remote sites and would knock the crew off for the day to go get a couple of deer for a barbecue.

John always loved children. He shared special connections with his, now grown, nephew and niece, Connor and Jessica, who remember him with much love. He enjoyed golf and fishing. He once brought his mother and grandmother to Alaska to enjoy the fishing. He arranged for a fly-in bear viewing trip that they spoke of for the rest of their lives.

John returned to Virginia to care for his mother in 2011 and spent time in Pittsylvania County before moving with his mother to the original property in Gloucester. He soon reconnected with Sharon and they married soon after.

John had a lifelong need to challenge authority and the capacity to love and care for everyone. He chose to live his life to the ideals that he held high and maintained his ‘whatever it is–bring it on’ perspective to life’s challenges. He trusted in God, his creator, and left knowing that he would be reunited with those that passed before him. John could be larger than life and truly had a heart of gold.

He leaves behind his dearly loved wife, Sharon, and her beautiful daughters, Afton and Nataleigh. Brother and sister-in-law, Trent and Michelle Farnsworth; uncles and aunts, Chris and Nancy Power, Mike and Lori Power; cousins, Chris Jr. and June, Stacey, Tara, Ron, Aubrey and nephew and niece, Connor and Jessica Farnsworth and many who became his brothers and sisters during his life, especially Steve Austin, also survive him. He was preceded in death by his sister, Kim Farnsworth, and his mother and father.

A celebration of life service will be held at a later date.