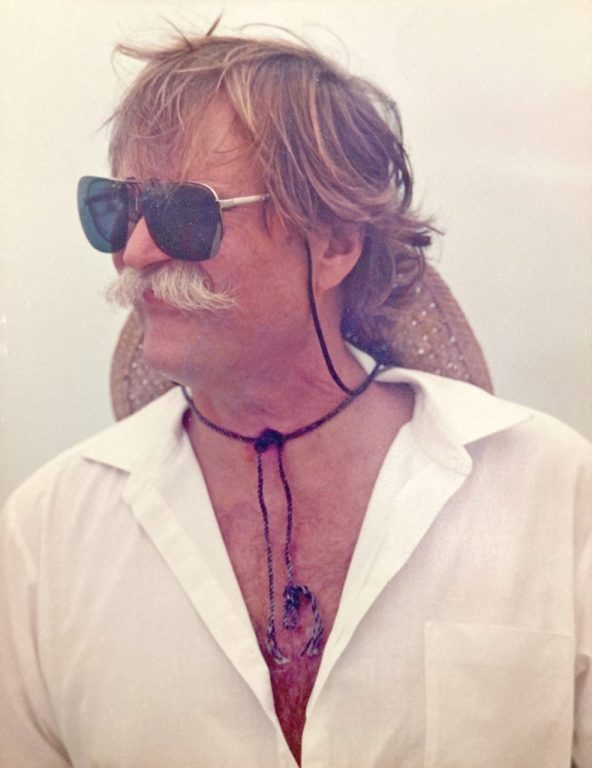 John Andrew Musick, known to all as Jack, passed away at home in Gloucester, Virginia, on Feb. 13, 2021. Jack had celebrated his 80th birthday a couple of weeks earlier, feted by a flock of plastic flamingos on the front lawn and cheered by his wife Beverly, his daughters Kate and Susanna, and their families, a video tribute from dear friends who could not be present, and a raucous cocktail-time motorcade of those closer to home. Anyone who knew Jack at all well won’t be surprised to learn that a couple of fingers of Lagavulin, an excellent, smoky single malt, were in the glass he lifted to the passing parade.

Jack’s entire life was a lesson in excellence and the many spiritual and intellectual rewards to be gained by following your bliss no matter where it leads. Born in Trenton, New Jersey, the only child of Helen Blaskovitz Musick and his lawyer father, John A. Musick, Jack spent his boyhood prowling the (then) nearby natural areas in search of critters large and small, including any snake he could stuff into a pocket (a lifelong habit that included transporting a “rescue reptile” cross-country on United Airlines before the advent of TSA searches), as well as frogs, toads, worms, cool bugs and the occasional moribund bird that his extraordinarily loving and tolerant parents allowed him to bring home for hours of further study in the cellar.

After his father’s untimely passing when Jack was 12, his mother marshalled uncles and friends to help nurture Jack’s blossoming interest in fishes, particularly the marine species that he could catch along the Jersey shore. An undergraduate degree from Rutgers University and a master’s and PhD from Harvard University prepared Jack to live his bliss: a life’s work as a marine scientist, starting with doctoral work at Woods Hole Oceanographic Institution and then a lowly instructor’s position in the marine science program carried out at the small Gloucester Point facility overseen at the time by the University of Virginia. Over the next 42 years at what evolved into the prestigious Virginia Institute of Marine Science (VIMS) of the College of William and Mary, Jack’s passion for studying all things fishy would lead him to establish the VIMS fish collection (now the renowned Nunnally Ichthyology Collection) which today contains approximately 350,000 specimens used for study and research by scientists around the world.

Over time Jack attained every possible academic rank, from assistant and associate professorships to Professor of Marine Science and head of Vertebrate Ecology and Systematics. In 1999, he was named to the first Marshall Acuff Chair in Marine Science, which he held until his retirement in 2008. He was senior author or co-author of 170 scientific papers, served as co-author and editor of 14 scientific books and proceedings, and co-authored eight trade books, four of them with his wife Beverly, a science writer. Their book, The Shark Chronicles, detailed Jack’s life and times studying sharks with a posse of other prominent researchers. He was also an author and editor of the seminal Field Guide to Fishes of the Chesapeake Bay.

In addition to his research and publishing work, Jack wholeheartedly embraced teaching and mentoring students in the VIMS graduate School of Marine Science. In the classroom, on longlining cruises and in other field work, he found deep personal satisfaction in training new generations of marine scientists, encouraging them to publish their work in the scientific literature and watching them grow into accomplished researchers and fine teachers themselves. All told, Jack served as a Major Advisor to 50 graduate students awarded the PhD and 38 awarded master’s degrees.

Jack’s abiding fascination with sharks drove much of his research and scientific publications through the decades. He was a founding member and early president of the American Elasmobranch Society (sharks and their kin). An ardent advocate for shark conservation, Jack was instrumental in convincing Congress to pass legislation regulating commercial shark fisheries along the eastern seaboard while supporting recreational fisheries. In the early 1970s he established what became the world’s longest time series of annual shark surveys, a tool that to this day continues to help with global shark management. This and other seminal research led to Jack serving many years as co-chair of the Shark Specialist Group of the International Union for the Conservation of Nature (IUCN), for which he traveled the globe in support of shark research and conservation efforts.

Not content to stick solely to sharks and other fishes, in the late 1970s Jack responded to a graduate student’s wish to study sea turtles by launching a VIMS research program on those endangered marine reptiles. He eventually cofounded and served as president of the International Sea Turtle Society (ISTS) and helped pioneer the use of satellite tracking to better understand the biology and life history of leatherback and loggerhead sea turtles. For more than 25 years he served as Regional Coordinator for Virginia for the National Marine Fisheries Service Sea Turtle Stranding Network. In 2017, Jack received the ISTS lifetime achievement award in recognition of his lifetime of accomplishment toward the study and conservation of sea turtles.

These few facts barely scratch the surface of the career Jack pursued with so much passion and brilliance. His many awards include the Outstanding Faculty Award bestowed by the State Council on Higher Education in Virginia (SCHEV), the Thomas Ashley Graves Award for Sustained Excellence in Teaching, the Lifetime Achievement Award in Science, Commonwealth of Virginia, the American Elasmobranch Society Distinguished Service and Leadership Award, the Distinguished Service and Excellence in Fisheries Education awards of The American Fisheries Society, which elected Jack as a Fellow in 2015. Jack was also a National Fellow of the Explorers Club (New York) and a Fellow of the American Association for the Advancement of Science.

Jack was a beloved husband, father, stepfather, Pop-Pop and bonus grandpa, roles he cherished with all his heart. In addition to his wife Bev, he is survived by his daughters, Kate Musick and Susanna Musick Pearson; Susanna’s husband, Mark Pearson; Kate’s children, Zane and Zoe Musick-Williams, and Susanna and Mark’s son, Alex Pearson. Jack was an attentive stepfather and bonus grandpa to the family’s California contingent, Sean Azarin and his sons, Connor Azarin-Burdine and Seneca Azarin-Burdine. He also deeply valued his lifelong connection with the Musick cousins in New Jersey: Tom and his wife Deb and their sons Andrew, Matt, and Phil; Phil’s wife Heidi and their son, Peter. His French Brittany spaniel Goldie was his constant companion, following along wherever the Big Dog went.

In accordance with Jack’s wish to keep things simple, no funeral is planned. Jack always loved a party, though, and such a huge life deserves a huge celebration, which is being planned for later this year when and where people can gather more safely. To anyone wishing to make a contribution, please consider donating in Jack’s memory to any of the following: The VIMS Foundation/General Graduate Student Fund, Attn: Susan Maples, P.O. Box 1346, Gloucester Point, Va. 23062; the Nature Conservancy (support.nature.org/donate), Friends of the Dragon Run (www.dragonrun.org), The Society for Conservation Biology (www.conbio.org) or any other worthy organization dedicated to environmental good works. Andrews Funeral Home, Gloucester, is in charge of arrangements.